Solar cells are the building blocks of solar panels and are directly related to how efficient are solar panels. Solar cells convert sunlight to electricity through a process called the photovoltaic effect, where electric current is generated when the cells are exposed to sunlight. There are three broad categories of solar cell: monocrystalline, polycrystalline, and thin-film solar cells. 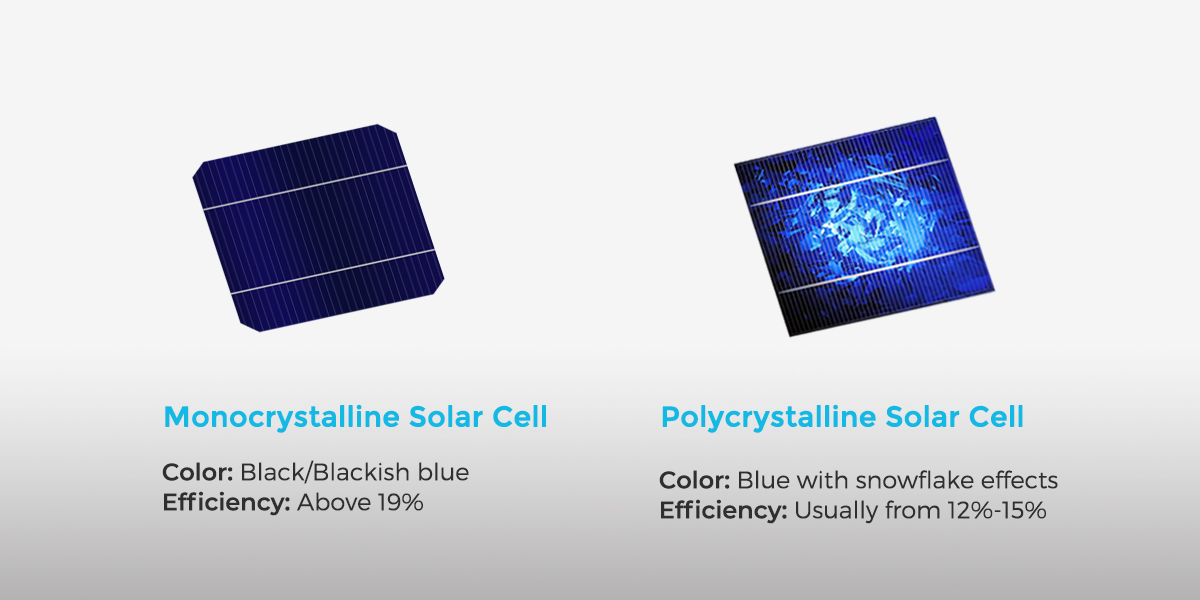 (Pic 1. Comparing a monocrystalline to a polycrystalline solar cell.)

Cadmium Telluride (CdTe) offer higher efficiency than other thin-film cells. And because they use only 1 percent of the silicon needed for a crystalline cell, and a less energy intensive manufacturing process, they are a lower cost option. They’re flexible and durable making them excellent options for curved surfaces. However, they do need additional solar panel maintenance and cleaning to deliver consistent performance outdoors. They also contain rare and toxic elements including cadmium which require extra precautions during manufacturing and recycling.

Solar technology is constantly evolving in the quest for solar cells and panels with more power and increased efficiency. There are now a number of technologies on the market that offer increased performance, and each uses different design, materials and components to meet your energy needs.

Interdigitated back contact cells are high performing with a sleek design. They use back contact technology that doesn’t require metal ribbons on the front of a panel’s cell. That means they can absorb more sunlight per cell because there is no shading caused by the metal ribbons. IBC cells can reach efficiency of up to 29.1%. 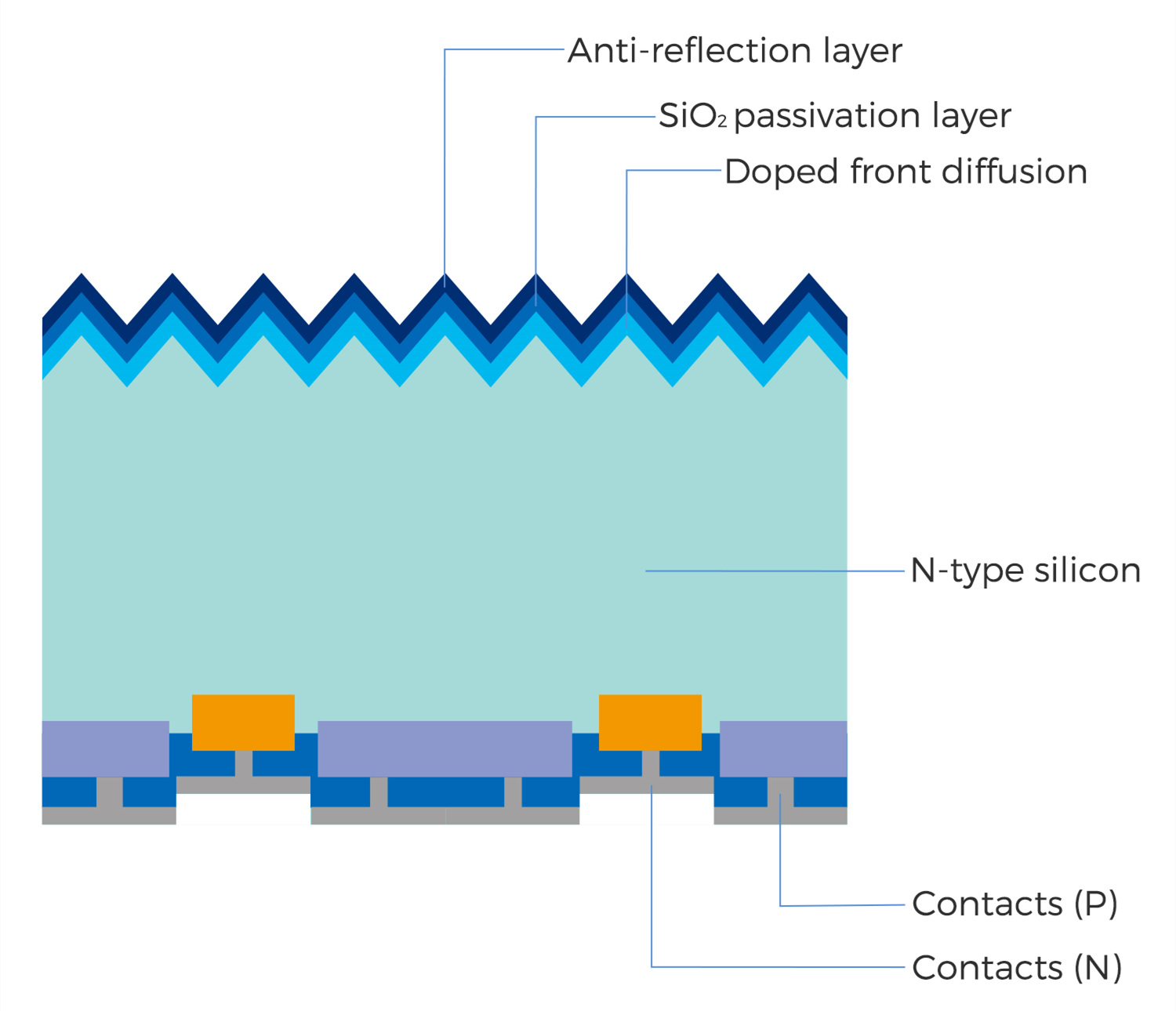 Passivated emitter and rear contact cells, or PERC cells, add an additional layer to the back of traditional solar cells. The extra layer bounces the light into the cell a second time giving the panel a second chance to capture the energy of the sunlight. This additional layer also prevents the aluminum back sheet from absorbing light which can reduce efficiency by producing additional heat. Research published in 2017, shows the efficiency of a PERC cell can achieve beyond 25 percent. 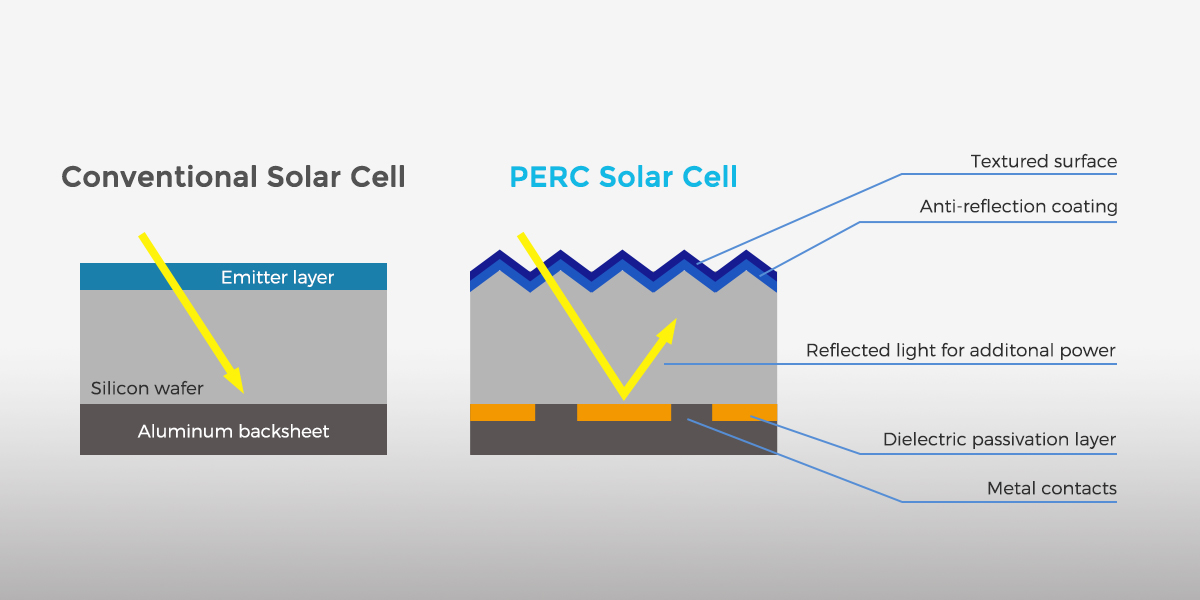 (Pic 3. Comparison of a conventional solar cell with a PERC solar cell.)

Combining half-cut cell technology with PERC cells is a growing trend in solar modules. Half-cut cells, as their name would imply, are standard size cells cut in half, doubling the number of cells that can fit on a panel. Traditional monocrystalline panels typically have 60 to 72 cells. Half-cut panels have 120-144 cells. By cutting the cells in half, energy loss from resistance is limited by reducing how far the energy travels within a cell. The panel itself is divided into two sections so each can operate as a separate panel, allowing one section to create energy even if the other section is shaded.

Modules utilizing half-cut cell technology are more tolerant to high temperatures than conventional modules. Risks of hot spots are also reduced through improved bypass-diode configuration. We will cover more on this in the section on shading. 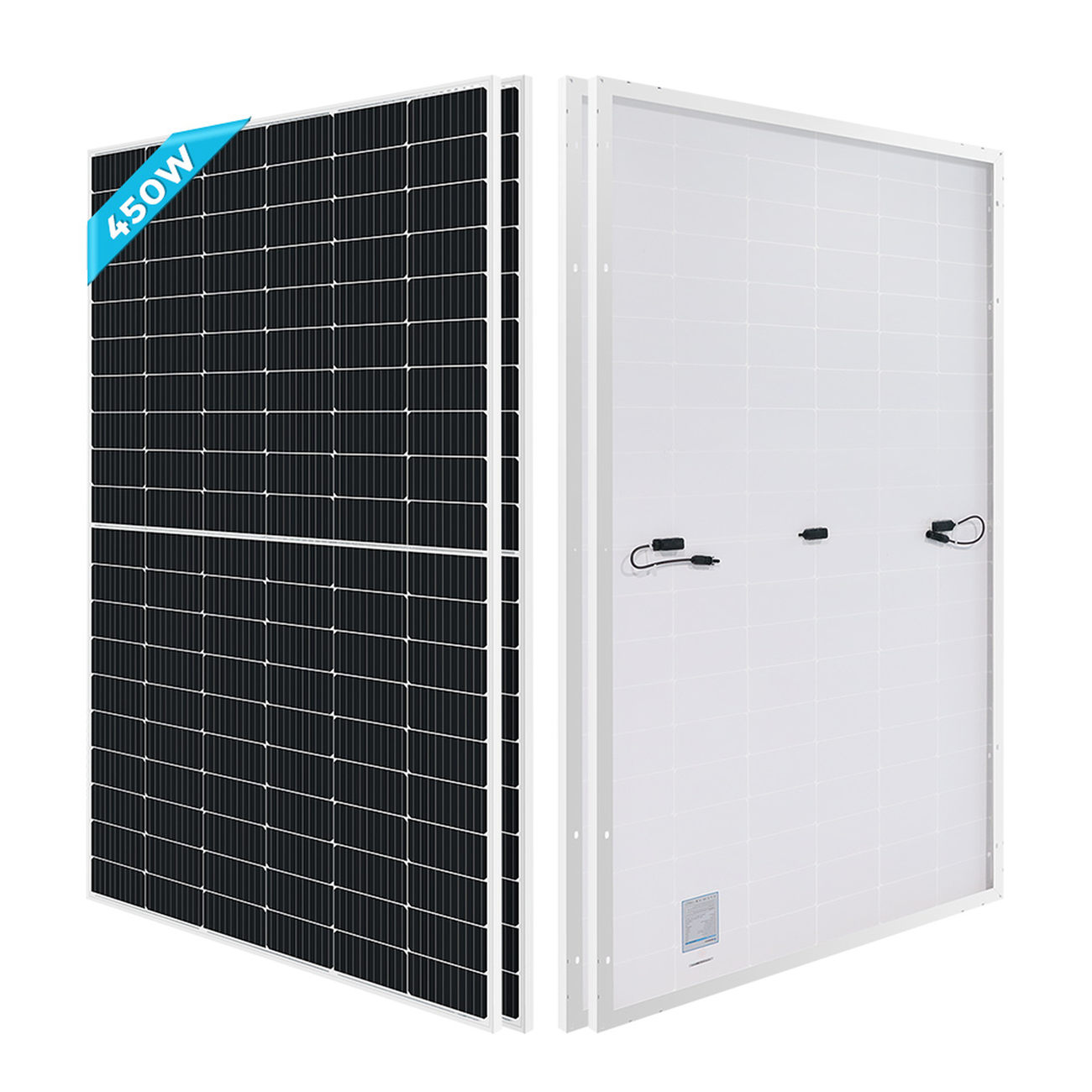 We don’t mention on our product pages that Renogy products use half-cut cells.

There are a few environmental and positioning factors that affect the efficiency of a solar panel. These include irradiance, temperature, location, shading, tilt and others. All are important considerations when planning your solar project for on grid or off grid solar .

Irradiance refers to the amount of solar energy that hits a square meter of a surface per second. Irradiance is measured using standard testing conditions and doesn’t consider any other factors that may affect efficiency.

Mohamed Amer Chaaban from Penn State University is an expert in the relationship between irradiance and power output in photovoltaic modules. The diagram below demonstrates shows how solar panels operating under irradiance of 1250W/m2 have a better power outcome than those under 750W/m2.

(Pic 5. The power output delivered by PV modules under different irradiance conditions. The higher the irradiance is, the more power a solar panel can generate. Data from e-education

Weather conditions play a significant role in performance and efficiency of solar panels. Lower temperatures tend to help your system deliver more voltage at high efficiency. However, if your system is in an area with lots of cloudy days you’ll produce less power, and snow accumulation on the panels will reduce power output as well.

When planning your system, make sure your PV modules can operate free from shadows cast by trees or nearby buildings. Shade can prevent solar panels from absorbing enough light to complete power conversion even in peak daylight hours.

Hot spots, caused by partial shading, can greatly reduce the performance of PV modules. The hot spot effect is one of the most common reasons that solar panels fail. Partially shaded cells don’t produce energy, while other cells operate as usual to produce current. As a result, the current generated by non-shaded cells doesn’t pass through shaded cells and can lead to concentrated heat. Overheating can eventually develop into a hot spot and damage adjacent cells or even the whole module.

Bypass diode and half-cut cells deal with the effects of shading differently. The diagram below shows a full cell module (left) and half-cut cell module (both 6 strings). Each is shaded on half the module. For the module on the left, the bypass diode is at the top of the panel, and all 6 strings of cells stop working because the current is unable to pass through the shaded area.

However, the module on the right uses half-cut cell technology and can mitigate the effect of shading. The half-cut cell panel is split in half and consists of 6 groups of cell strings with the bypass diode in the middle. Half the solar panel is shaded and has stopped working. The other 3 cell strings still produce 50 percent more power than the traditional module on the left. The cells that are working are also distributing excessive heat to reduce the risk of hot spots.

(Pic 6. Bypass diodes are configured at different locations on solar panels: one at the top of the panel while the other is in the middle.)

The way solar panels are positioned on your rooftop can significantly impact their efficiency. This is referred to as orientation, meaning the compass direction your panels face most of the time. In the northern hemisphere, we advise you to orient your solar panels to the south or west to get the most sun exposure.

However, getting the right orientation for your solar panels is only one part of maximizing performance. Tilt plays an important role as well. If possible, always tilt panels at an angle toward the sun rather than lying flat. Solar panels should be mounted with a minimum 20 degree tilt toward the sun when possible. For example, the ground mounted solar panels are always positioned with tilt brackets.

Understanding solar panel efficiency is a good starting point for planning your solar project. But don’t forget that warranty and quality of other equipment such as the solar panel battery and 12V inverter are just as important to ensure you get a high performing, long-lasting system.

Renogy has more than a decade of experience in the solar industry, and we’re dedicated to providing you with everything you need for your solar system. We provide up to 10-year material and workmanship warranties for solar panels with a 25-year 80% power output warranty. Buy solar panels on Renogy’s online store right now!

If you have any questions about solar, visit our Renogy customer service for more information. Renogy is always ready to answer questions or provide guidance. Our support team will be happy to help. Get started on your sustainable, off-grid journey with Renogy today!