Chances are that most people imagine solar panels as devices that go on the roof. The familiar sight of solar panels arranged on a rooftop is accurate in many cases, but that’s certainly not the only way people can choose to integrate their solar arrays.

While there are certainly clear benefits to having solar panels installed on your roof, it’s not as one-sided as some people might think. Having your panels up and out of harm’s reach also puts them out of reach of easy maintenance and cleaning. Ground mount solar panels could be a better choice than roof-mount, depending on the situation.

If you’re considering solar panel installations for your home, cabin, or other structure, there’s a lot to look into before you make your choice. Of course, every individual situation is going to be different. Budget, open space, weather, climate—these all play a role in choosing between roof-mounted, ground-mounted, and other solar panel configurations.

You should consider everything here when making your choice, but consulting with professionals and really taking your time to make a decision is the way to go. You don’t want to find yourself rushed into ground or rooftop installations for your solar panel system and regret it later.

What Is a Ground-Mounted Solar Panel?

At the most basic level, ground mounted solar panels are just what they sound like. They’re solar panels that aren’t mounted to a rooftop, pole, or other existing structure. Instead, they’re installed on the ground with a racking system custom-designed for that specific purpose.

Ground-mounted solar panels can actually vary significantly in height. The supports themselves could be tall enough to let you walk comfortably underneath, or they could be just enough to give a few inches of clearance. As long as the support structure is directly on the ground, they’re still considered ground-mounted.

Solar farms are among the most common everyday examples of ground-mounted solar panels that you might think of. These are the dedicated solar generation stations where acres of panels are installed in open spaces to provide power for the grid, just like other power plants do.

This is one of the most popular configurations for solar farms for a few clear reasons. First, they’re most commonly built in areas that wouldn’t have other uses. This means that there aren’t any roofs available in the barren desert flats where they’re found. Similarly, there’s no reason to install them on high poles to avoid shadows without much going on, as there aren’t any tall objects to interfere with their sunlight.

The primary reason that homeowners put panels on rooftops is to save space. When it comes to installing ground-mounted solar systems for your home, the primary consideration is going to be open space. How much of your yard are you willing to give up for installing ground-mount solar panels? You can use our Solar Panel Calculator to determine what kind of space commitment you’re looking at.

You’ll also need to make sure that you have somewhere that you can install the panels for good south-facing sun exposure. If the only area in your yard that can fit solar panels has its sun exposure even partially blocked, you’re not going to be getting the most out of your solar panels.

One unique ground-mount racking system that can give homeowners the best of both worlds is to go with a solar carport. If you don’t have a garage, you can install ground-mount solar panels beside your home with enough clearance to park a car under. Just like conventional carports that were the standard before full garages, you’ll keep your car out of the weather and direct sunlight. However, you’ll also be powering your home as well! 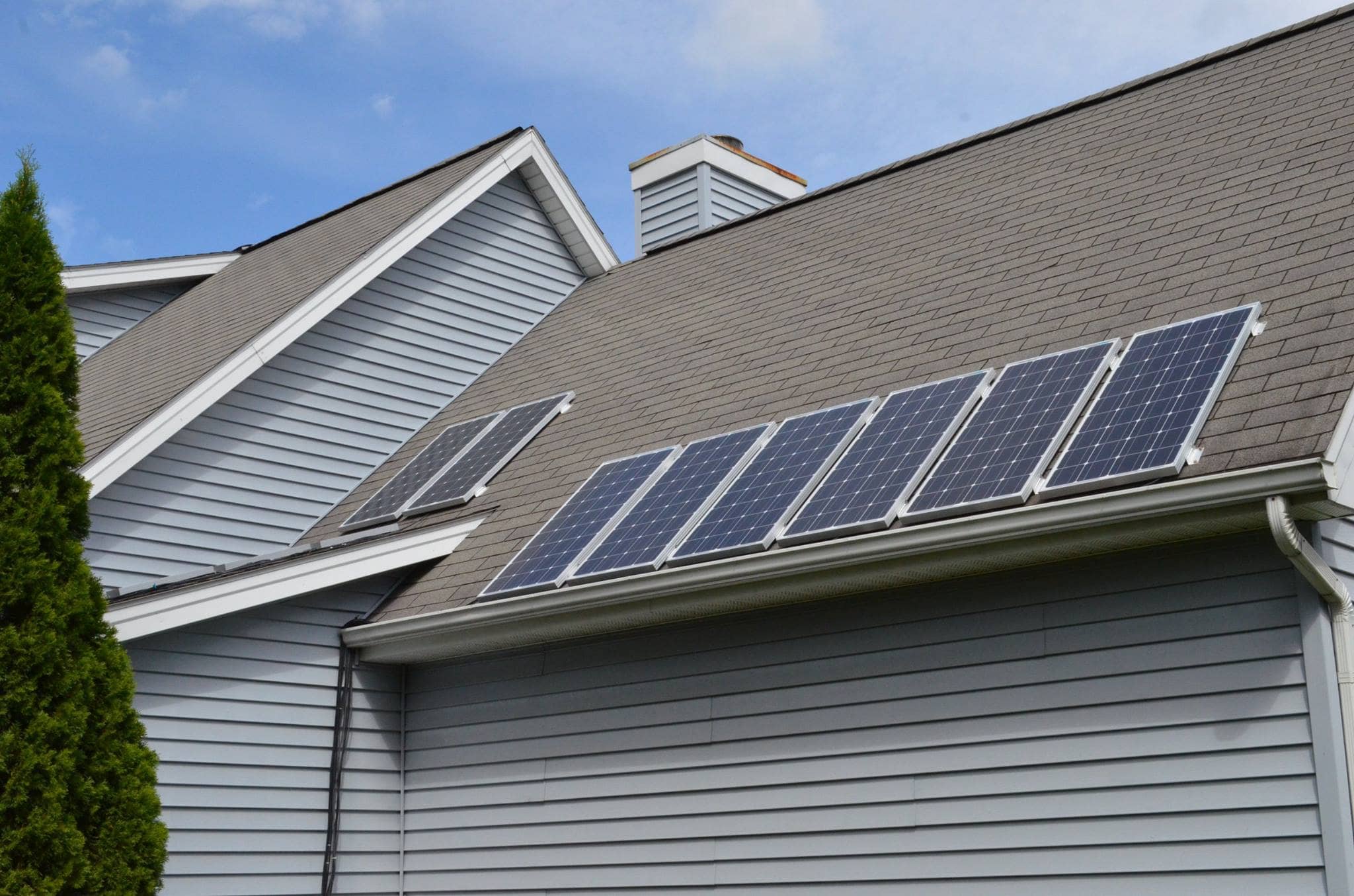 Pole-mounted solar systems are another option to consider when choosing the racking system for your solar panels. Solar panels can be installed on a pole, providing height and sun exposure while taking up minimal space on the ground.

You’ve probably already seen pole mount solar panels in specific applications like powering remote street lights or in other uses where isolated power is needed. However, they’re often used for many of the same applications that you would use standard ground mounts with just a few alterations.

You’ll often see pole mount systems installed as either top-of-the-pole or side-of-the-pole panels. These devices are just what they sound like, with the solar panels either sitting at the very top of the pole or attached to an angled bracket on the side.

Top-of-the-pole systems are more effective for typical household or commercial use. The number of panels that an individual pole can support will vary widely depending on the specific situation. For a larger number of panels, larger and more robust poles and racking systems need to be installed.

Some pole-mounted arrays can be rotated to absolutely maximize sun exposure throughout the year. While this is certainly a benefit, it’s a real concern for large commercial operations where even small percentages add up to substantial dollar values.

Pole-mounted systems can also be explicitly designed for high-wind and harsh weather applications. Pole-mounted panels can stand up to just about anything that ground-mounted solar panels can with a good enough system.

Of course, pole-mounted systems do come with a downside. Because they’re high-up, they can be hard to reach for maintenance and cleaning, essentially bringing up the same issues as roof-mount. It’s also much easier to expand ground-mount systems in the future. With pole-mount, you’ll likely need to install another pole.

Some problems come up when installing pole-mounted systems that installing a ground-mounted system can avoid. Basically, certain types of ground simply aren’t suitable for poles that require significant penetration into the ground to stay steady.

If the ground is too hard, you won’t be able to install a pole-mounted system for a reasonable cost. Ground-mounted solar panels could be the only option that works, regardless of how cost-effective either option is.

You’re also going to save a lot of trouble in maintenance. Ground-mounted systems are easy to access for inspection, maintenance, and cleaning. Pole-mounted systems can be 20 or more feet up in the air, making even the most minor maintenance possible a major undertaking.

While pole-mounted systems might be less likely to become damaged thanks to their safe location high above the ground, any damage that does happen will be challenging to repair.

Is Ground Mount Solar Panels Cheaper Than a Roof-Mounted System?

While it might seem counterintuitive, ground mounted solar panels systems are, in fact, usually more expensive than roof-mounted systems. You might think that lugging panels onto a roof and installing them in an out-of-the-way location would come at a premium, but having a roof as a starting point to build on can actually reduce costs.

When installing roof-mounted solar panels, the racking needs a foundation on which to be installed. This can mean laying a cement foundation or a variety of other options, but in any case, you aren’t simply setting the solar panel mounts on the ground and calling it a day.

This additional solar panel installation cost leads to ground-mount panels costing more than roof-mount panels for the same capacity, although it’s not by much. Depending on the size of the foundation and solar array being installed, you might also need to get additional permits to carry out the installation, costing both time and money.

Some types of ground-mounts have manual adjustments that can be made throughout the year to make the best use of available sunlight throughout the sun. While they don’t offer the same versatility that a pole-mount system does, they provide more adjustment capabilities than roof-mount systems, producing a bit more electricity and narrowing the price gap in the long run.

You should also consider that while the installation is more expensive, you’re more likely to get optimal performance from your ground-mount solar panels. Because they don’t have to make any concessions based on the angle or direction of your roof, they can be installed to have the absolute perfect sun exposure. That means more electricity production, potentially saving you a lot throughout your solar system’s life. 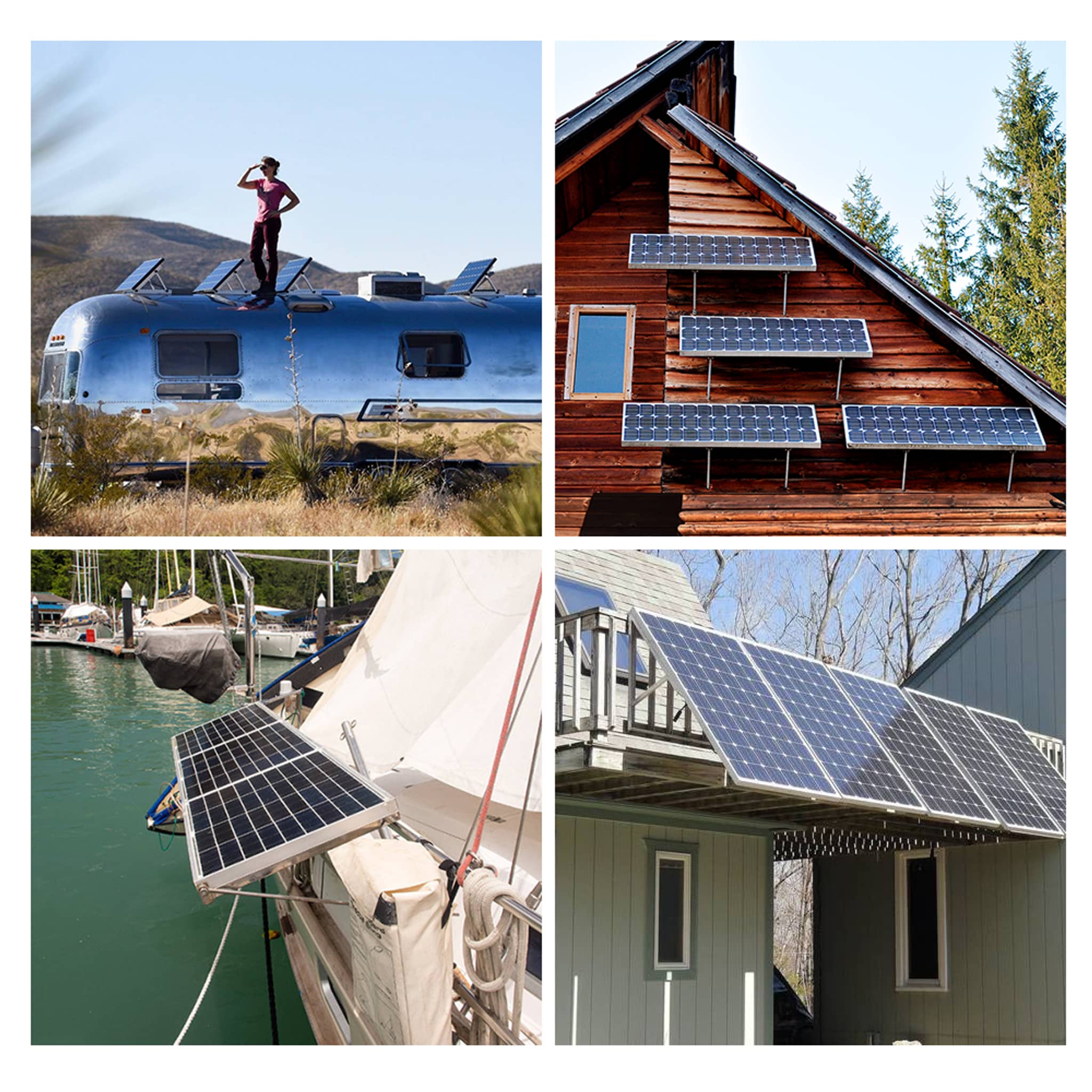 The biggest pro when you're considering ground-mounted systems is that they still allow homeowners to go green when roof-mounting just isn’t possible. Why wouldn’t someone be able to use roof-mounted panels? Perhaps the rooftop is not at the right angle or faces the wrong direction necessary to generate renewable energy.

You could also find that your roof (at least the part facing south) isn’t large enough to hold all of the panels you need to power your home. In that case, ground-mounted solar panels are a clear choice. They can be placed essentially anywhere, letting you choose the optimal location to generate the most electricity.

There’s also the fact that ground-mounted panels don’t require any work on your roof. Whenever you make new installations on your roof, you risk accidentally incurring damage. If not properly mounted, your roof-mount solar panel could provide entry points for moisture and pets to get into your roof. Over time, these can cause damage to your roof that could need costly repairs to correct.

Solar panels actually work better when cool, so having air circulation around your panels is in your favor. Ground-mounted panels have significant clearance for airflow, while most roof-mounted panels are practically directly against the roof. While this is a minor point, it’s another point in favor of ground mounted solar panels systems.

Solar panel maintenance is also much easier for ground mount solar panels. To reach your roof-mount panels, you’ll have to go up onto your roof. There’s no other way around it. Whenever something seems off with your ground-mount panels, you can simply walk over to them. This is a huge bonus in the winter, where you can use a household broom to remove snow instead of some specialized snow clearing tool.

While being closer to the ground makes them easier to maintain, it also makes them easier to damage. Ground-mount panels are significantly more likely to be damaged by simple accidents like a runaway baseball or even damage from wildlife. And that’s not to mention easier access for any intentional vandals.

Being closer to the ground will also mean that your panels build up more dust and dirt, which blows around but stays relatively close to the ground. While rooftop and pole-mount systems are almost always kept clean enough by typical rainfalls, you can often find yourself having to hose down ground-mount panels.

However, the biggest con for most homeowners is going to be the space that ground-mount systems take up. How important this is will vary from person to person, so you really need to take the time to consider which solar panel system is right for you.

From what we’ve looked at today, it’s clear that choosing between ground-mount, pole-mount, and roof-mount isn’t a simple matter of figuring out which one is the best. Instead, the only way to make the right choice is to consider your own needs carefully and what it is you’re looking to get from your  solar panel system.

No matter what type of solar power system you’re looking to install, Renogy has the high-quality components and solar panel kits you need. From the panels themselves to all of the supporting equipment like batteries and inverters, Renogy is the premier source for everything solar.

See other related articles at Renogy：

How many watts to run a house

how efficient are solar panels

How long do solar panels last

How Many Solar Panels Do I Need