Tiny homes and solar panels are a match made in heaven. Many people build and move into tiny homes because they want to live a more efficient, sustainable lifestyle. Adding solar to a tiny home is a great way to live in accordance with those values and goals, all while taking advantage of the cost-saving advantages and convenience factors of solar.

What are the key components I’ll need for my system?

The crucial pieces in every tiny home solar installation are solar panels, charge controllers, inverters, and batteries. Solar panels are made up of many solar cells made of silicon. When sunlight hits a solar panel, it creates an electric current. That current then feeds into a charge controller, which controls how much current goes to a battery. Batteries connected to your system will store and produce that DC power. In order to use AC appliances, such as microwaves, laptops, and phone chargers, an inverter is used to change the power from DC into AC power. If all goes according to plan, when you flip the switch in your home, you’ll be able to easily have light without even thinking about it.

Flexible solar panels weigh less than the rigid solar panels, but rigid panels are more typically durable. They can also be mounted to tilt on your roof or on the ground, which makes them highly efficient.

Charge controllers sit between the energy source and storage and prevent the overcharging of batteries by limiting the amount and rate of charge to your batteries. They also prevent battery drainage by shutting down the system if stored power falls below 50 percent capacity.

You’ll also need a way to store all the power you’re generating with your solar panels. This is where deep cycle batteries come in. There are a few different deep cycle battery options, including lead acid, absorbed glass matt, and lithium iron phosphate batteries. Lead acid batteries are the most inexpensive option and are available at most big-box and auto stores. Absorbed glass matt batteries store 10 to 15 percent more energy than lead acid batteries and charge up to four times faster. Lithium iron phosphate batteries are the most space-efficient, making them a preferred choice for many people in tiny homes. They are the most expensive options, but they also last four times longer than lead-acid batteries and weigh much less.

What are the key things to consider when adding solar to your tiny home?

Will you be off-grid or on-grid?
Knowing whether you want an off-grid, on-grid, or hybrid system is important to decide on early in the process.

Off-grid solar systems (stand-alone power systems) utilize batteries to store energy produced from solar panels, giving you access to power no matter the circumstances. If you live in a remote area without reliable and affordable access to the grid, off-grid solar can be a great way to meet your energy needs.

On-grid systems (grid-tie solar systems) give you access to energy from the grid, in addition to collecting energy produced from solar panels. You do not need battery storage and can simply use energy from your panels when they are producing. Then, when your panels aren’t producing power, such as at night or when it’s too overcast, you can tap into the grid. One important thing to consider is on-grid systems do not function during a blackout. This is because it would be a safety concern for a system to push power into the grid when utility workers may be out making repairs to the network.

Hybrid on-grid systems with battery storage give you the benefits of both on- and off-grid systems. With the decreasing costs of batteries, more and more people are choosing to add battery storage to their on-grid projects to give them the ability to collect and store energy, as well as tap into the grid when necessary. They also give you energy access during blackouts.

Do you have room to mount panels on the roof?
Many tiny home owners want to mount solar panels on their roof, but space on tiny house roofs are limited, often only about 200 square feet of space. Many of those roofs are also pitched, meaning you can only mount panels on one side, giving you even less space for panels. One way to address this challenge is by installing a ground-mounted solar array. By mounting on the ground, you’ll be able to build a larger solar panel array, upwards of 4,800 watts. 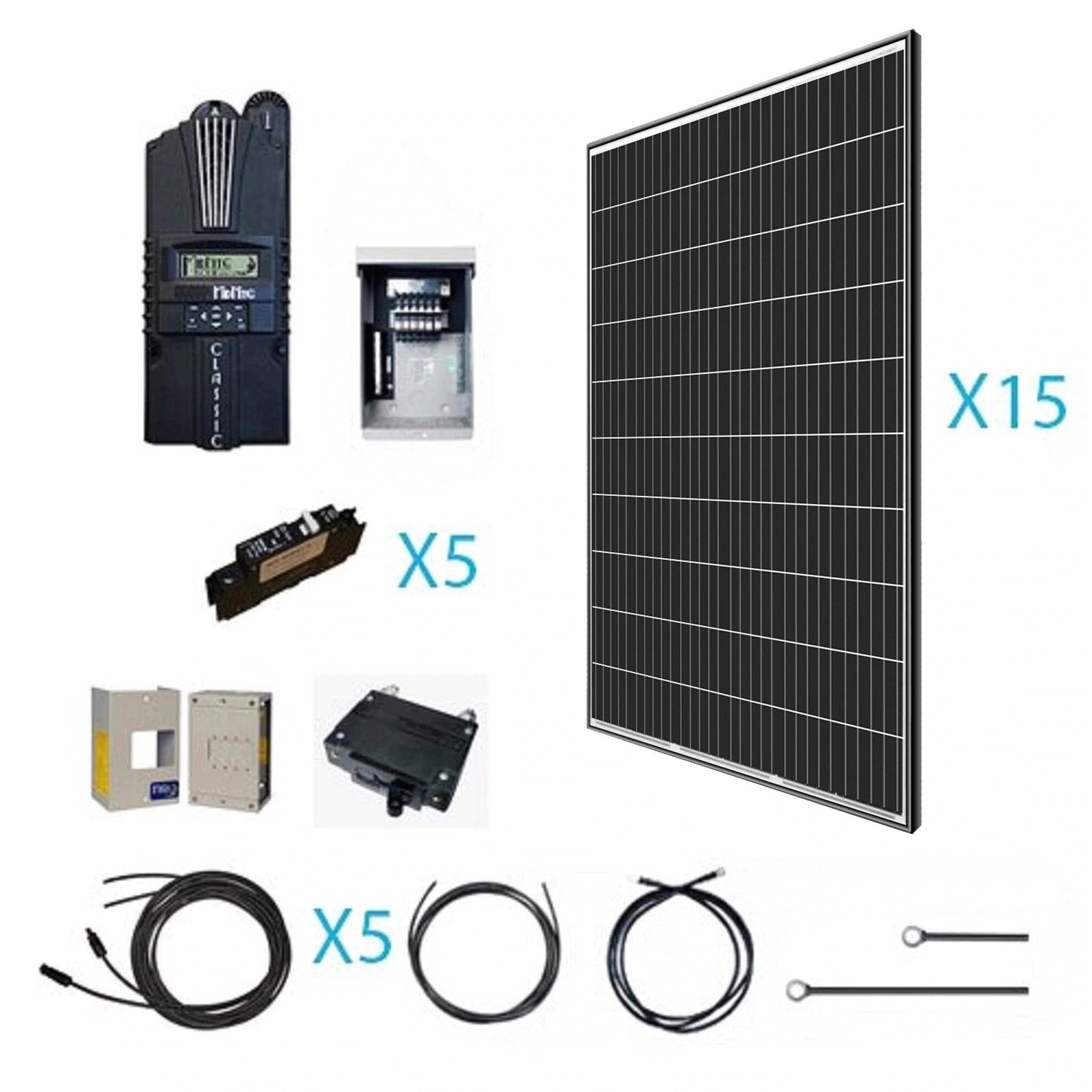 Can you install a solar system yourself?

Yes! Installing a small-scale, off-grid solar system can easily be done on your own. Renogy’s home and cabin kits make it even easier by including most of the necessary components you’ll need, including solar panels, a charge controller, mounting hardware, combiner boxes, and circuit breakers. You’ll still need to purchase batteries and an inverter. Cabin kits are available in a variety of sizes to meet a range of needs, including 1200, 2500, and 4800 watts.

Do I need special permits to go off-grid on my home or cabin?

Every jurisdiction is different, so you’ll want to check with your state energy office, local officials, or a local renewable energy organization to see what rules, regulations and building codes exist.

How many solar panels do I need for a tiny home?

To size your system, we recommend using the Renogy solar panel calculator. The solar sizing calculator allows you to input information about your energy needs and lifestyle to help you decide on your solar panels. You’ll just need to know what total watts your electronics will consume, how long you plan on running the devices, your charge controller efficiency, and average sun hours per day. The solar panel calculator will then be able to tell you the minimum and recommended system size.

In addition to knowing how many watts you’ll need for your system, you’ll also need to select the right voltage for your system. 12 volt systems are good for many smaller applications, such as tiny homes and RV’s. If your energy needs are more than 1,000 watts you’d typically want to go for a 24 volt system. If your energy needs are over 3,000 watts, we recommend a 48 volt system. Renogy’s cabin kits are available in both 12 volt and 48 volt options.

Solar inverters come in a range of different sizes. Like panels, inverters are rated in watts. The size of your inverter should typically be similar in size to the DC rating of your solar panel system. So if you are installing a 2000 watt system, you should purchase an inverter of around 2000 watts.

How much does it cost to put solar panels on a tiny house?

Depending on the size, your solar installation can greatly vary in cost. For example, Renogy’s off-grid kits range from about $3,000 for a smaller 12 volt system to $6,500 for a 4800 watt system.

Living an energy independent, sustainable, and minimalist lifestyle doesn’t have to be a daydream. By adding a solar installation to a tiny home, you can easily make those visions a reality. Take the time to do your research, properly size your system, and shop for the right technology, and it’ll be no time before your home can start harnessing power from the sun.