Have you ever dreamed of waking up along the rainfall of the Smokies? Gentle raindrops kiss the top of your bus parked in the deep woods.

Your beloved partner, baby, and loyal furry friend are still sleeping. But you know you are not alone. There are many other creatures who call those hardwood forests as their home.

Believe me, at least once in one’s lifetime, we have dreamed of tossing the chaos and disturbances of ordinary life behind.

Go outside. Go enjoy the moment. Go explore the magnificent work of nature.

This is how Will Watson and his family of 5 live their lives. 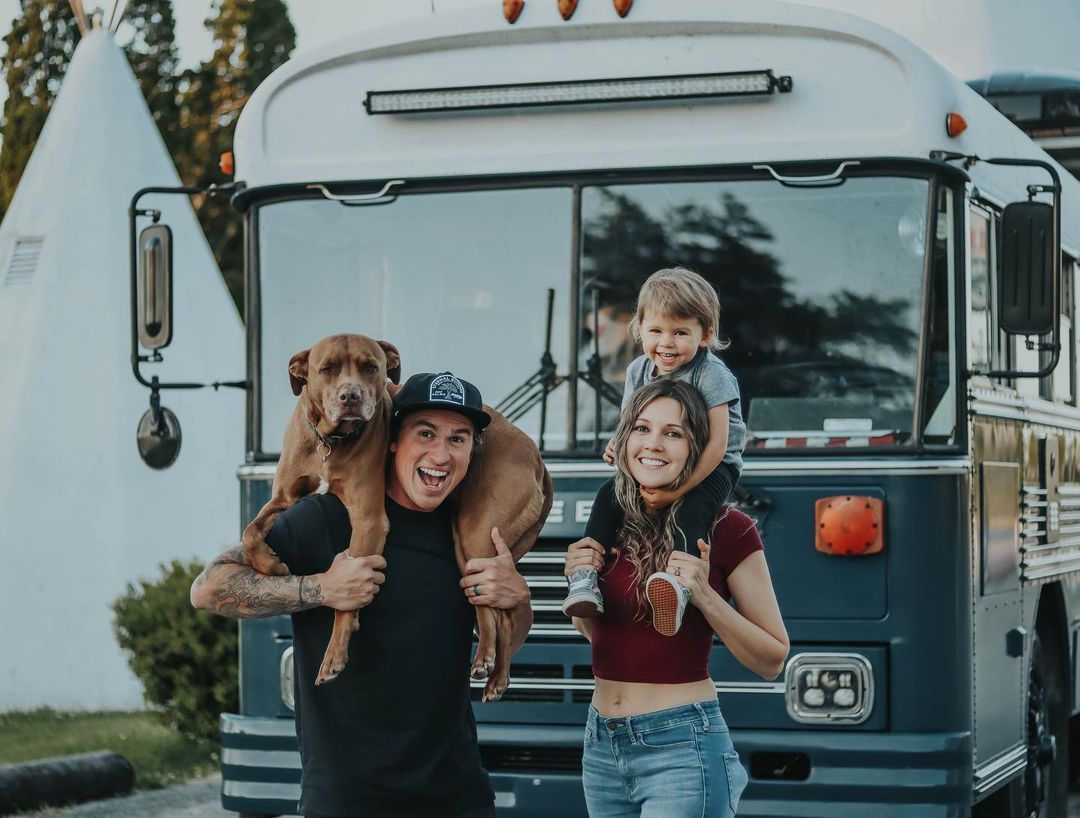 (From left to right, Rush, Will, Roam, Kristin)

“We’ve been living on the bus for what is to be about to be three years now. We originally bought Juan the Bus in 2017. It was just me and my wife.” Will said, “In the middle of building, we had the little one, a little curve ball, but we made it. And then, of course, our dog. It took us about a year and a half to build Juan and we have been on the road ever since. We hit the road on April 1, 2019 and haven’t ever looked back.”

Everything started in 2015, after an awesome road trip up the California coast. Will’s wife Kristin became obsessed with the idea of van life. For the next 2 years, she occasionally would harass Will about selling all their stuff and living in a van. To which he would reply, “that’s not realistic.” And at the time, it wasn’t. “We had debt, we had jobs that required us to be stationary, and we had a lot of stuff,” Will said.

When they started looking at houses to buy, nothing ever felt right or worth going $400,000 into debt. As a couple who both worked full-time and spent an unavoidable amount of time traveling for work, they realized the only thing they missed while they were away was their dog Rush and their bed.

So, the idea of living big by switching into a tiny home didn’t come from nowhere. Will and Kirstin decided to go big, go bold. They wanted to buy a bus and convert it into a tiny home to live in full-time.

“By this time, we were debt-free, we both had jobs that allowed us to work remotely, we had gotten rid of a lot of stuff, and both considered ourselves minimalist.”

The stars had aligned. A few weeks later, Juan the Bus joined the family.

Juan is an old Air Force bus. “We officially call the bus The Number Juan Bus, Juan for short, and Air Force Juan for fun!” 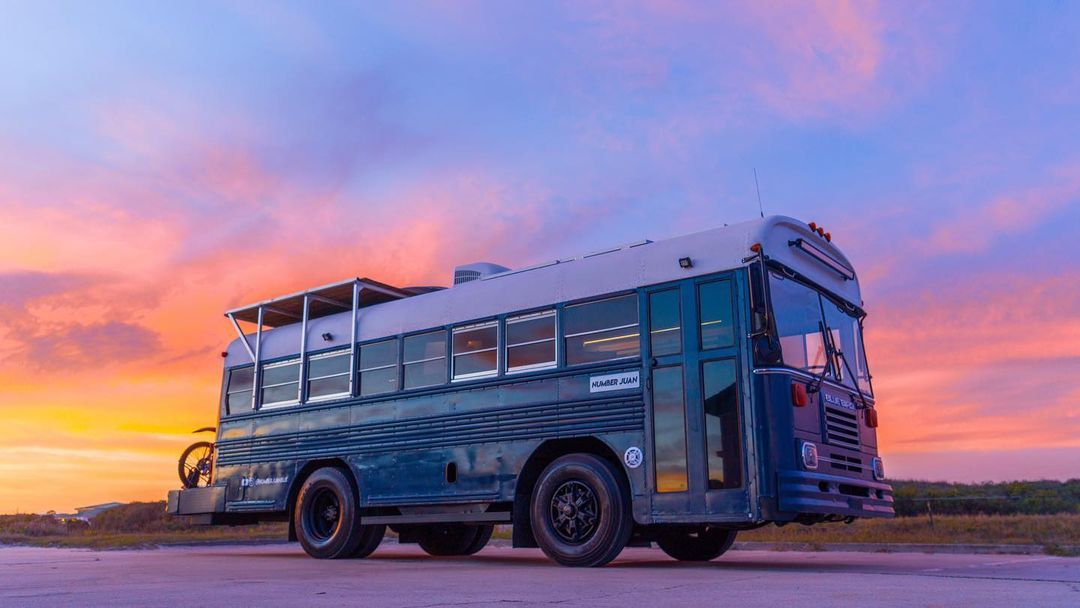 (Full view of Juan the Bus) 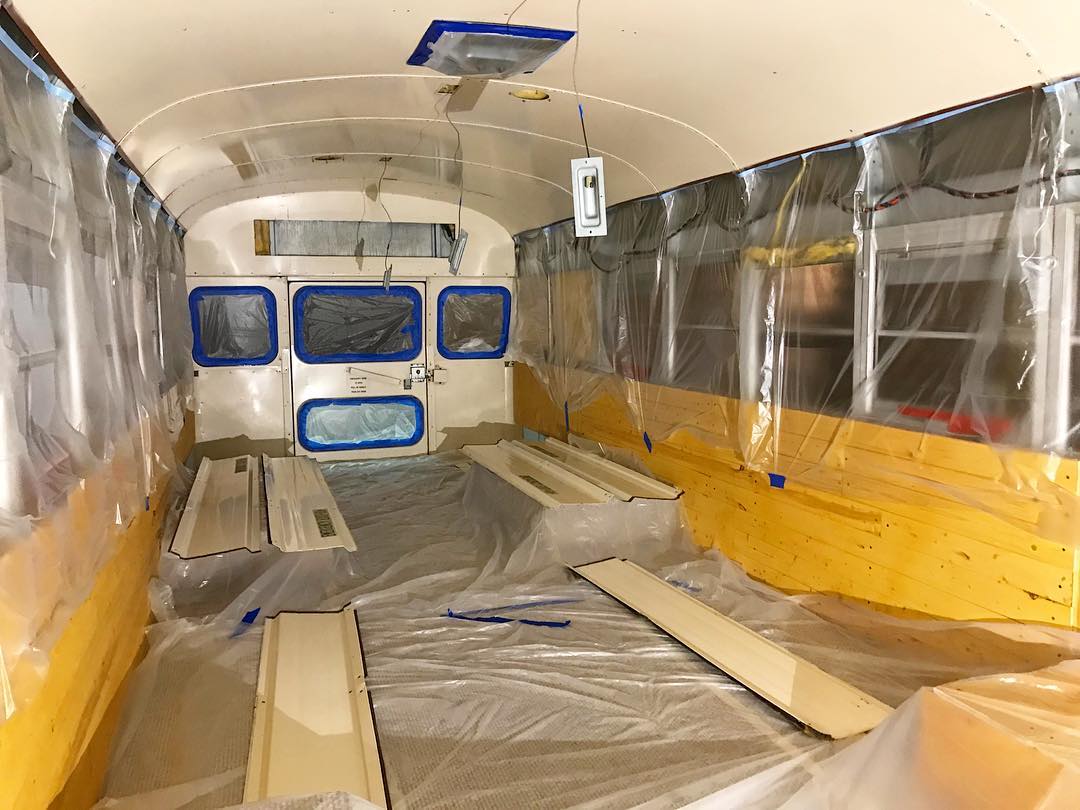 “It took us a year and a half to convert the bus with the help of Will’s dad, Bill. We estimate that the total build cost was around $30,000. You could definitely do it for cheaper, but since we planned to live on the bus full time and wanted to be able to go off-grid and travel the country, we didn’t cut any corners.”

Will also explained that raising a kid while driving off-road is actually not that hard or much different. Will and his family moved into the bus when Rome was only 5 months old. She turned 3 this year,

“The bus is all she knows. She’s adapted to it really well. She’s only three and she has already been to so many different places. It took me 20 plus years to do that. Rome loves it. And you know she’ll fall asleep when we drive on the road.” Will smiled when mentioning his little one. 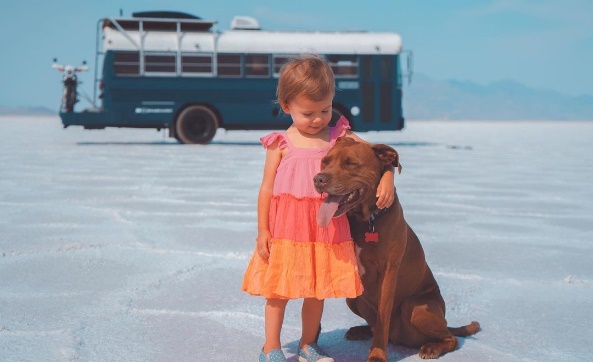 (Roam and Rush, Juan the bus in the back)

Along with the dream of moving into a bus, traveling around the country has been one of the top goals for this family. We travel full-time and work remotely.

“We’ve been to the lower 47 states but missed the state of Kansas, somehow. We’ve always just accidentally missed that one. Our plan is to go to Alaska eventually. But with COVID concerns and other problems, it’s been a challenge. We have been up into Canada as well.” 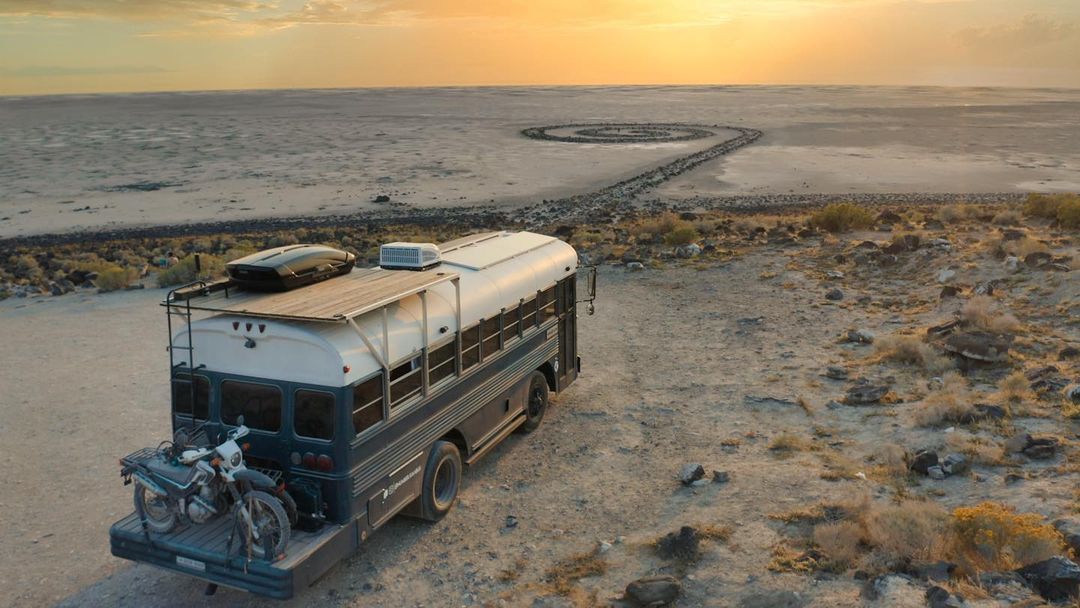 (Wonder scene in Utah, shot during the trip)

Around a year ago, Juan received an upgrade on the entire solar setup that has significantly improved Will, and his family’s off-grid experience. “I never worry about power anymore after we went from 500W to 800W. The panels are from Renogy, of course. It’s the best feeling to know that you have enough power when you need it and some extra to spare. Also, it’s hilarious, but we weren’t expecting the panels to fit that well. We placed them vertically, in two rows, and they lined up just perfect on top of Juan.”

A well-design system ensured safety and comfort during the trip. For those starting out or thinking about going off-grid or switching to van life, Will provided some advice to get going with your own project: “We do have some tips for people new to the solar world”.

“I think looking at a lot of the solar brands out there is necessary.”

“There’s definitely no need to buy everything on the largest scale or purchase those super expensive items. Of course, don’t go too small either”.

“Buy high quality items. It will be worth it in the long run”.

“Do the math. Search online. And if you really don’t know how to start, ask people on Instagram or Facebook. People in the community are super helpful willing to give advice and share their experiences.” 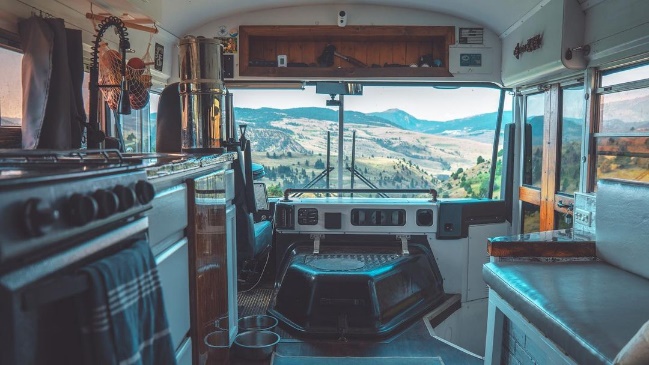 (Internal view of Juan the Bus, shot from the back portion of the bus) 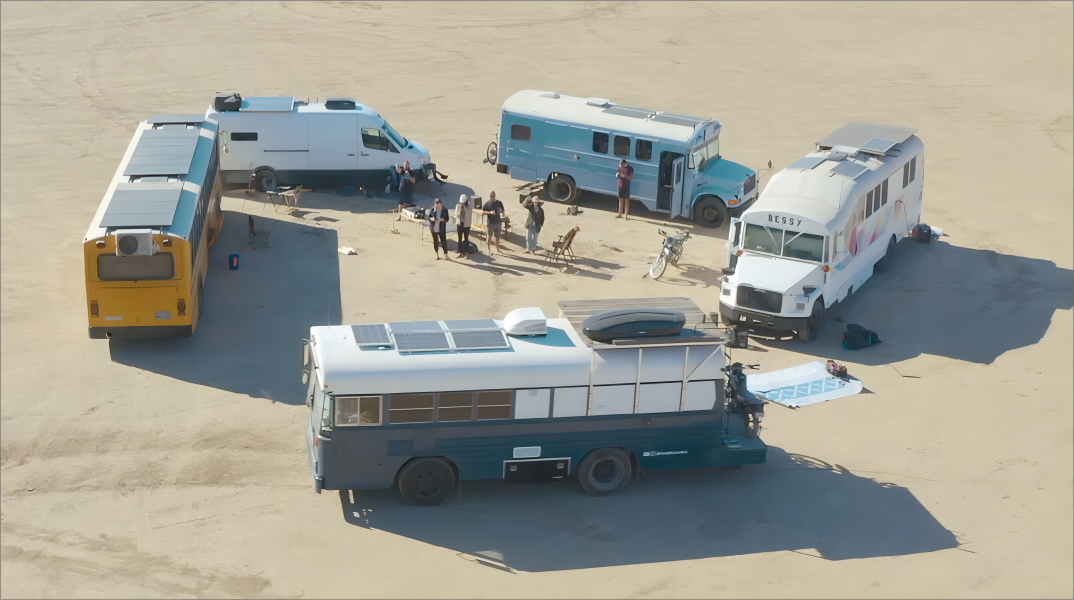 Off-grid compounds created by 5 motorhomes, located in the California desert)

“Solar is a brand-new world. You know, once we switched to solar, electricity was no longer the biggest issue. It’s renewable, clean, and unlimited. Don’t make electricity become your biggest worry.

Getting to know your lifestyle is definitely vital before you make the decision to switch to living off-grid. In terms of calculating one’s daily consumption, Will has his own theory: “You can live less wasteful. But there’s no need to cut corners on the size of the system and force yourself to entirely change your normal lifestyle.” 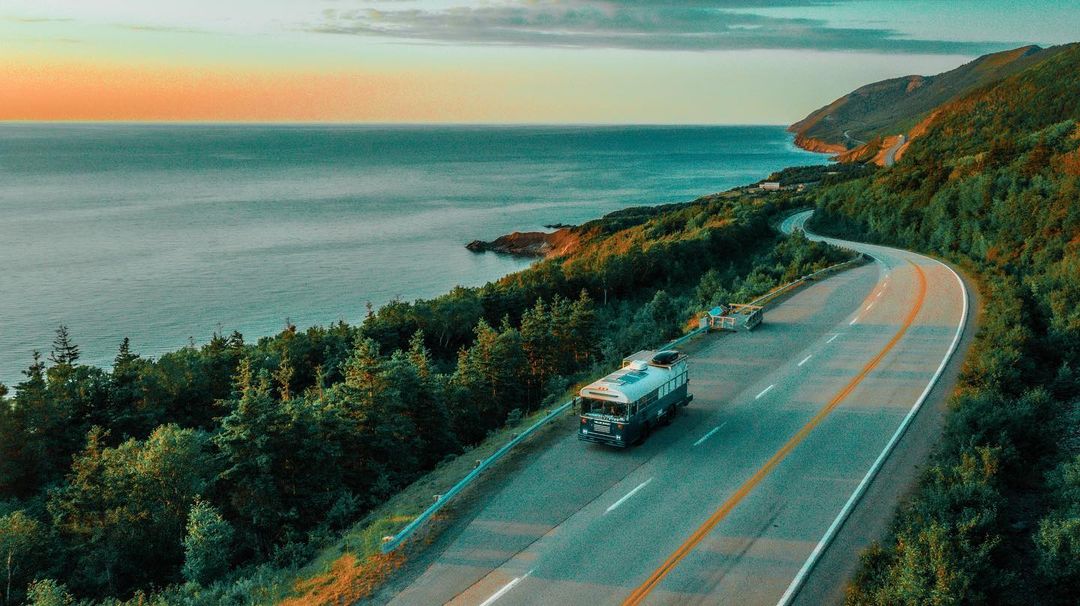 “I never changed my mind on switching to living on a bus. And I never regret where I am now.” Will put a final note on defining his unique travel lifestyle while Renogy interviews him.