As we’ve explored this country for the past 6.5 years, setting out our solar panel at each place we stop, we’ve come across many curious people. “Is that a solar panel?” “What does it run?” “Does it actually work?” we get these questions, and others, in campgrounds, grocery stores, and even gas stations. During our first few years on the road, we felt like trailblazers meeting only met a handful of other RV’ers running on solar. But folks, things have changed! Within the past two months alone we’ve met hundreds of people harnessing the sun and powering their mobile lives. Gas powered generators are becoming a thing of the past in many places.

Many of our new friends were eager to share with us the details of their systems, challenges they’ve overcome, and the gorgeous off-grid places living with solar takes them. Their vehicles range from van conversions to Airstreams, Class A motorhomes to skoolies; it seems that there isn’t an RV out there that can’t be converted to solar.

A+ Solar Powered System for a Class A Motorhome

We caught up with this newly (mostly) retired couple, Faith & Don Haywood, from Boone, North Carolina while they were traveling in southern Nevada. They purchased a 2011 Class A Winnebago Adventurer a few years back and used it on short trips while visiting and caring for aging family members. But, they had more in mind for the day when Faith could officially retire from her job in public health. They wanted the freedom to go wherever and whenever they wanted, without relying on full hook-ups at campgrounds. They found a mobile installer, Brian Boone, and made the solar plunge. Brian helped them select and purchase their equipment, and installed it all in one day, for a total cost (equipment and labor) of $3,000.

Here’s a look at how they power their rig which they’ve named “Silver Pearl” (with a sidekick Jeep, the “Gold Nugget”). We thought these names were quite apropos because Don is a jeweler with the ability to work nearly anywhere. Though, he admits that they’ve been having “so much darn fun” during the past few months, that he hasn’t really focused on work. That happens!

Just a few weeks into a 4-month trip, and they started having, “lightbulb moments” about running on solar. Here are a few keen insights they shared with us:


Why They Love Solar

They love Big Bend National Park in Texas and the Chiricahua National Monument in Arizona, which have inexpensive backcountry sites or national forest land next to the park. Don stated, “We’ve probably only needed to pay for 4 campground spots in the past 7 weeks,” since they can charge up wherever they have sun.

Known to their followers as EXPLORIST.life, Nate & Steph Yarborough transformed a 2007 Sprinter van into their home and office, with solar in mind from the beginning. After completing a thorough energy audit to make sure their solar investment would keep their computers, camera equipment, and drones running without a hitch, they spared no expense putting it all together. They estimate that their entire system cost about $10,000. 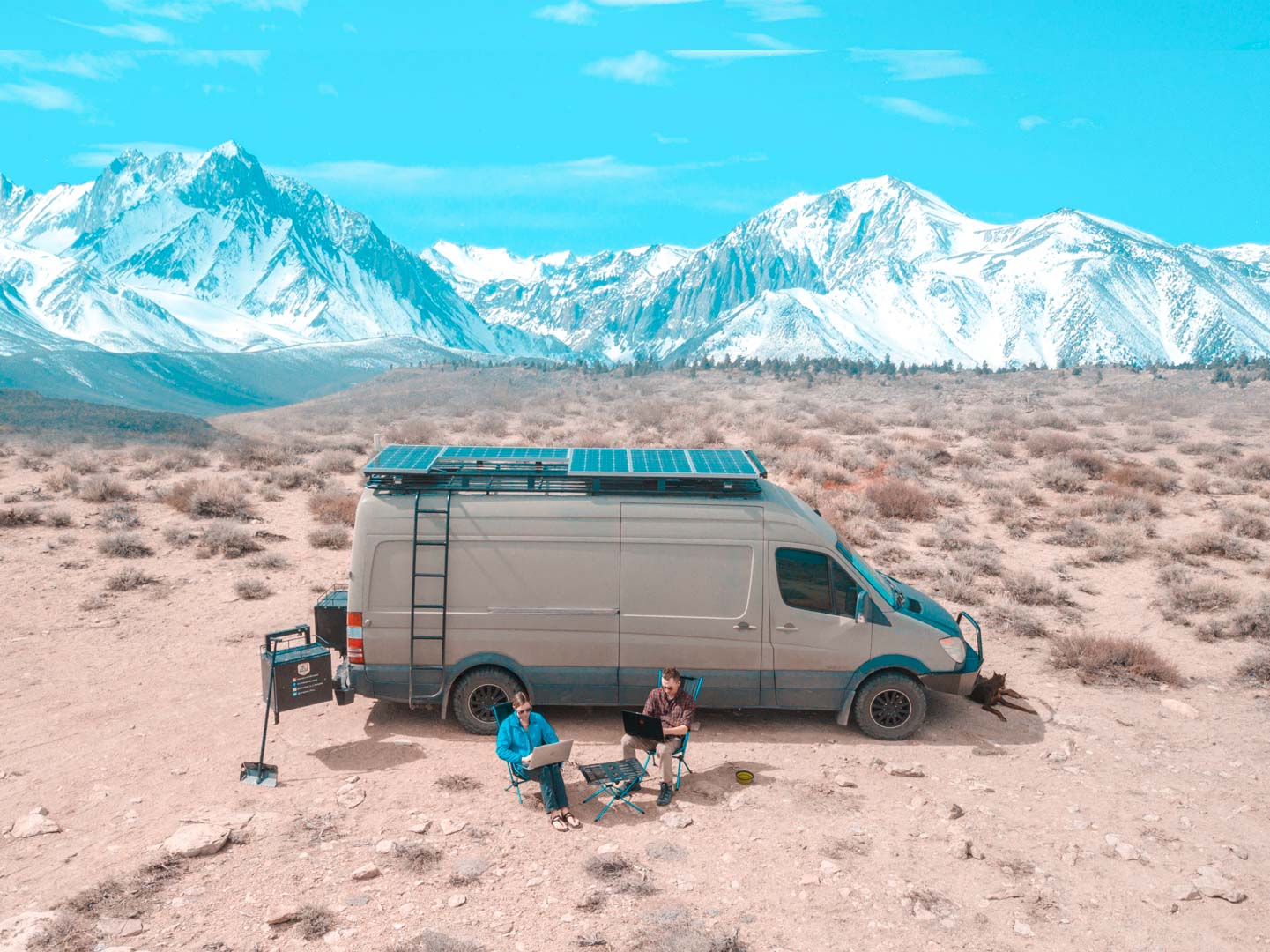 We caught up with Nate & Steph as they were enjoying some spring skiing in Banff, Canada. Meet “Backpack,” the van that they’ve been living, traveling, and working out of for the past 3 years. Here’s a quick rundown of their solar powered system:

Having installed the system themselves, they can address any problems encountered along the way:

Why They Love Solar

“It's great for the versatility it offers. We can go to a campground and plug-in during the winter and run a space heater when we are in British Columbia or we can stay unplugged for months in the summer (given we stay in modest summer temperature areas as we don't have an air conditioner).”

Will Solar Panels Work on an Airstream?

You Bet! This adventurous couple, Karyn & Paulo, bought and renovated a 1975 Airstream Argosy and hit the road about 6 months ago. With some assistance from an electrician friend, they did the whole install by themselves and use their rig as a home office as well. We caught up with them while enjoying nearly 3 months of solar camping along the beach in Baja California, just “living with the essentials.” 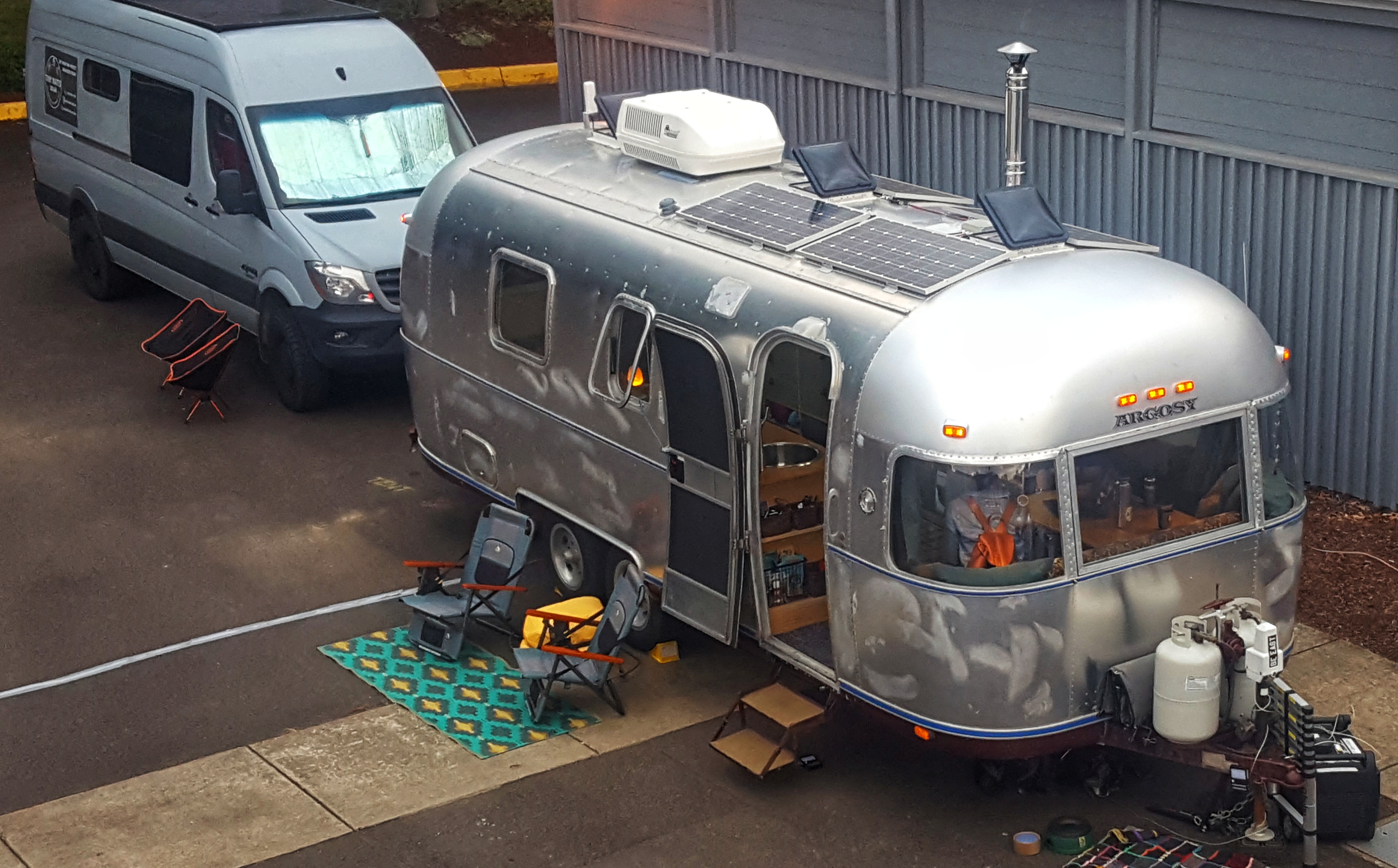 Here’s a look at what is included in their Airstream’s solar powered system, for which they spent about $5,500:

When we asked if there is anything that they’ve learned or would change, they discussed some challenges and solutions.


Why They Love Solar

“It is a complete game changer!” they exclaimed. “We can go anywhere for as long as we like.” Because they don’t need to find campgrounds to rely on an electrical hook-up, they appreciate the freedom and cost savings they’ve found in going with solar. 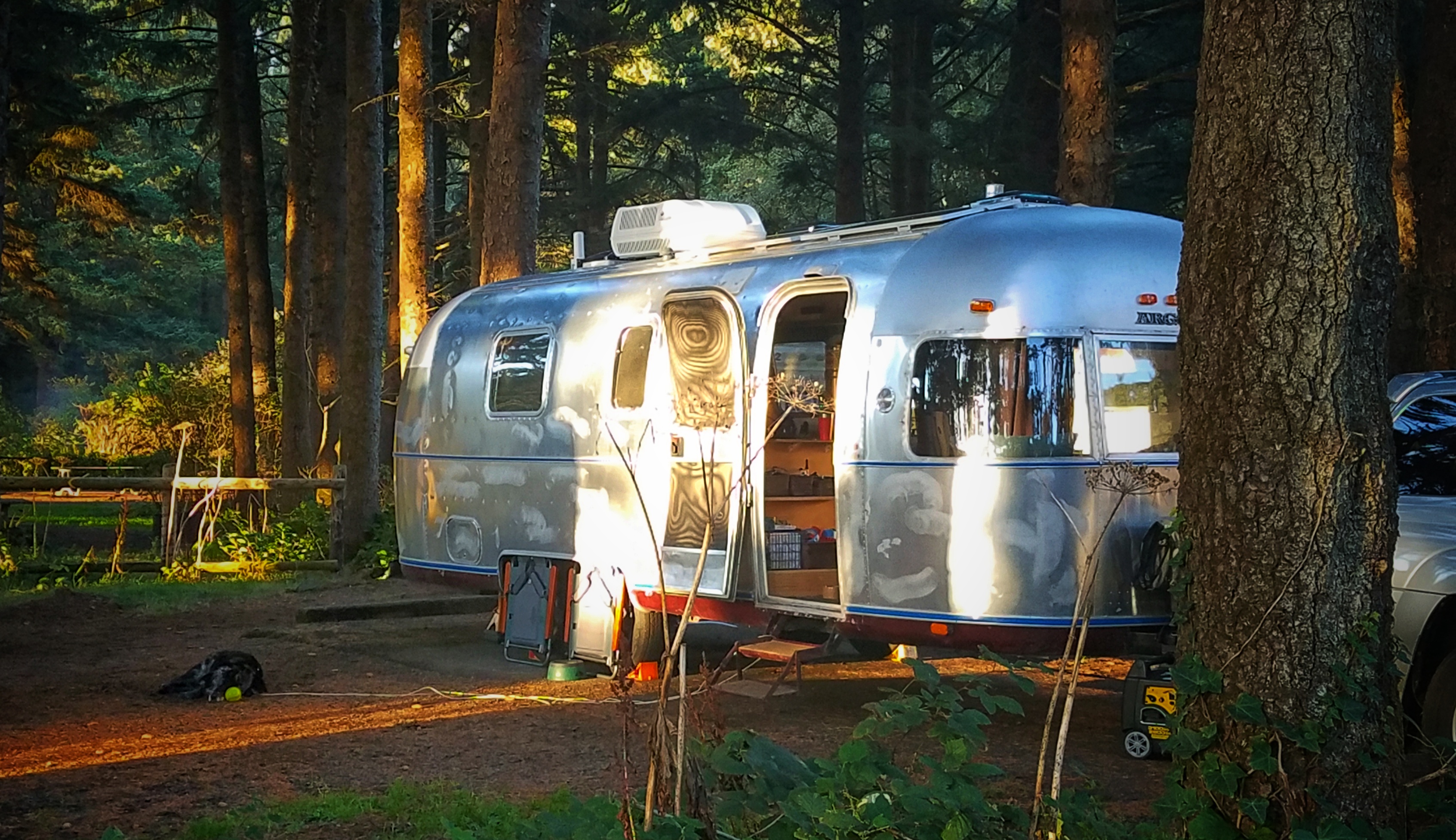 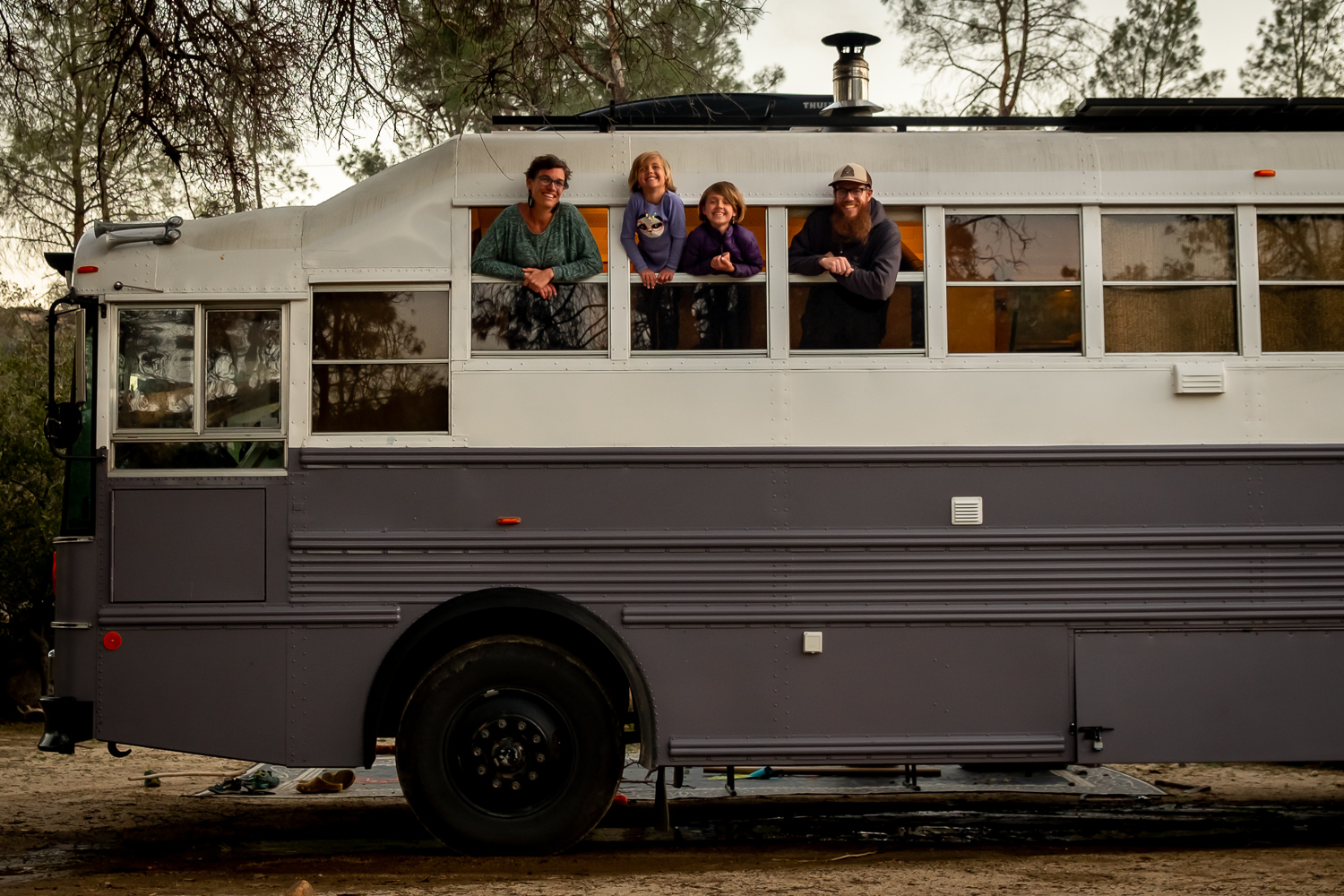 What if a family of 4 could live a mobile life in a converted school bus and never have to run a generator (or even own one)? Meet Libby, a 1994 Thomas Saf-t-Liner 40 ft bus, and her family – Elizabeth and Adam, with kids Sadie and Wren, who are taking “home school” to a whole new level. Just 5 months ago, they set off on their “deliberate life adventure” in their tiny-home-on-wheels. We caught up with them while they were enjoying early spring in Utah and they shared their solar story.

They installed the system themselves, estimating that they spent about $6000 on everything, including paying someone to put together a wiring diagram. Adam had enough experience with solar installation to read the diagram and run all the wires.

Overall, they are very happy with their system, sharing just a couple thoughts when we asked about challenges: 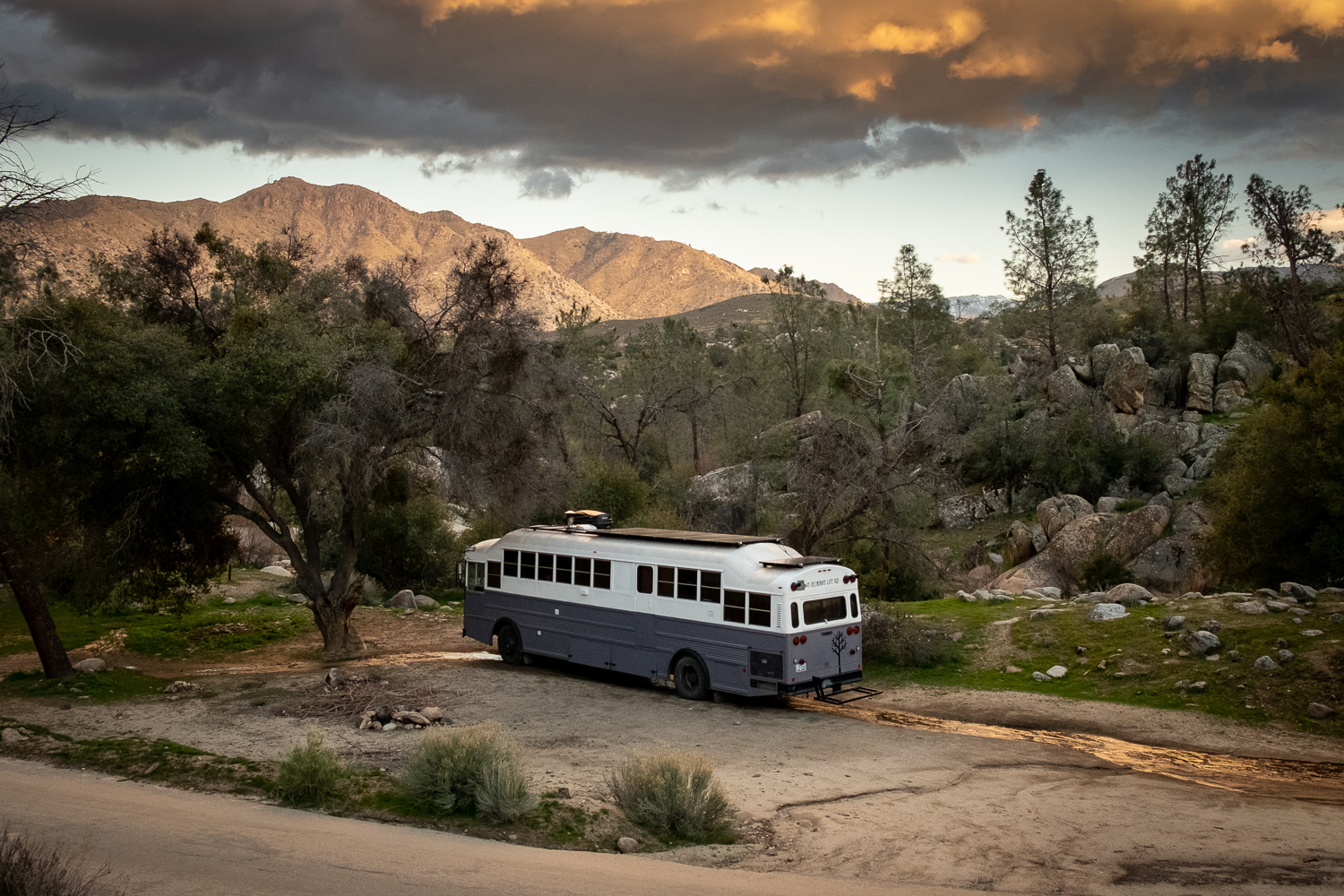 Why They Love Solar

Solar gives this young, active family the freedom to live and play in remote areas, while living comfortably. “We have no need for anyone's power but the sun's!” they told us. “We stayed for 3 weeks up a dirt road near St. George, UT, all alone with views of cinder cones and snowy mountains. When we ran out of water, we took our 5-gallon jugs into town with the car to fill and dumped them into the bus tanks.”

In 2010, we (the authors Shari and Hutch) bought a 1957 canned-ham style travel trailer on eBay for $900 and totally renovated it, inside and out. We spent about $600 on our solar powered system out of a total $2500 in updating it into a home. We quickly found Freedom in a Can in 2012 and haven’t looked back! 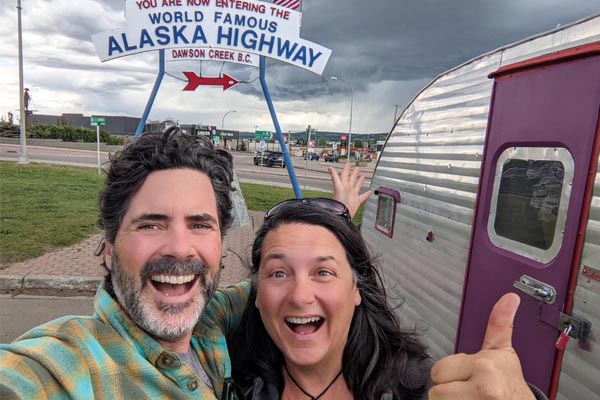 If you know us personally, you know we love to keep it simple – really simple. Living large by living small is one of our favorite mottos. We are currently traveling and working out of the southwest for the winter and will be returning to the gorgeous Maine coast this summer to do outdoor and environmental education.

Why We Love Solar

We can work and live off grid 95% of the time. One year, we boondocked for 10 full months, without staying at a fee campground. When you don’t have to worry about plugging in, the options of places to stay the night are nearly limitless! To date, we’ve solar powered our way through 49 states (except Alaska) and 4 Canadian provinces. While we didn’t take Hamlet to Hawaii, we did live off-grid with solar while volunteering on an organic farm. 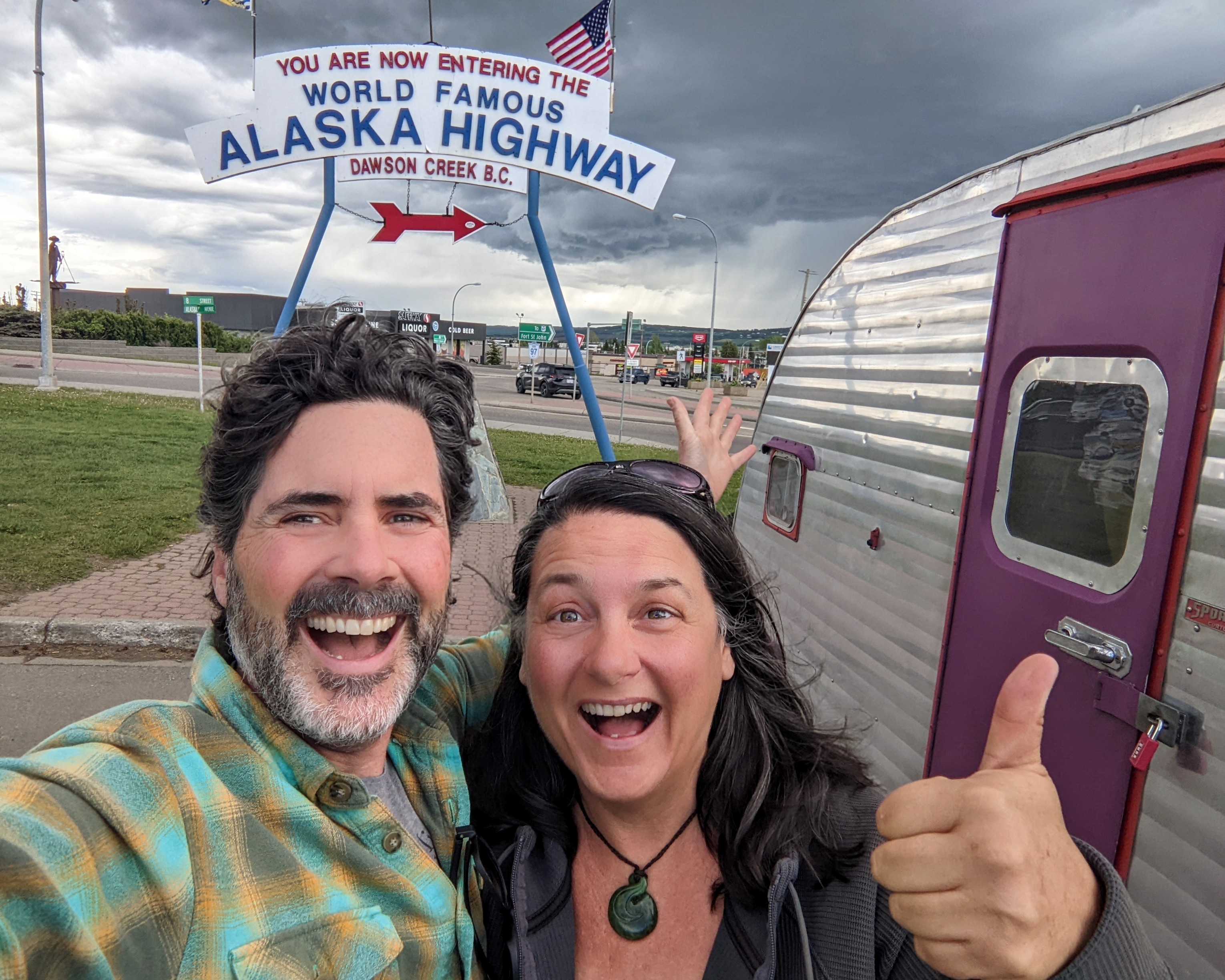 Ready to go solar? Get 10% off Renogy products by using this link and our discount code (canlife). We always love hearing from our readers and help work out solutions, so contact us with any questions or comments.

Shari Galiardi & David Hutchison have turned their higher education backgrounds, desire for life-long learning, and thirst for adventure travel into writing, photography, video production, and public speaking tours from coast to coast. Known to their friends as simply Shari & Hutch, you can learn more about their full-time, solar powered adventures on their website at freedominacan.com. Or, follow them on Facebook, Instagram, and YouTube as “Freedom in a Can.”