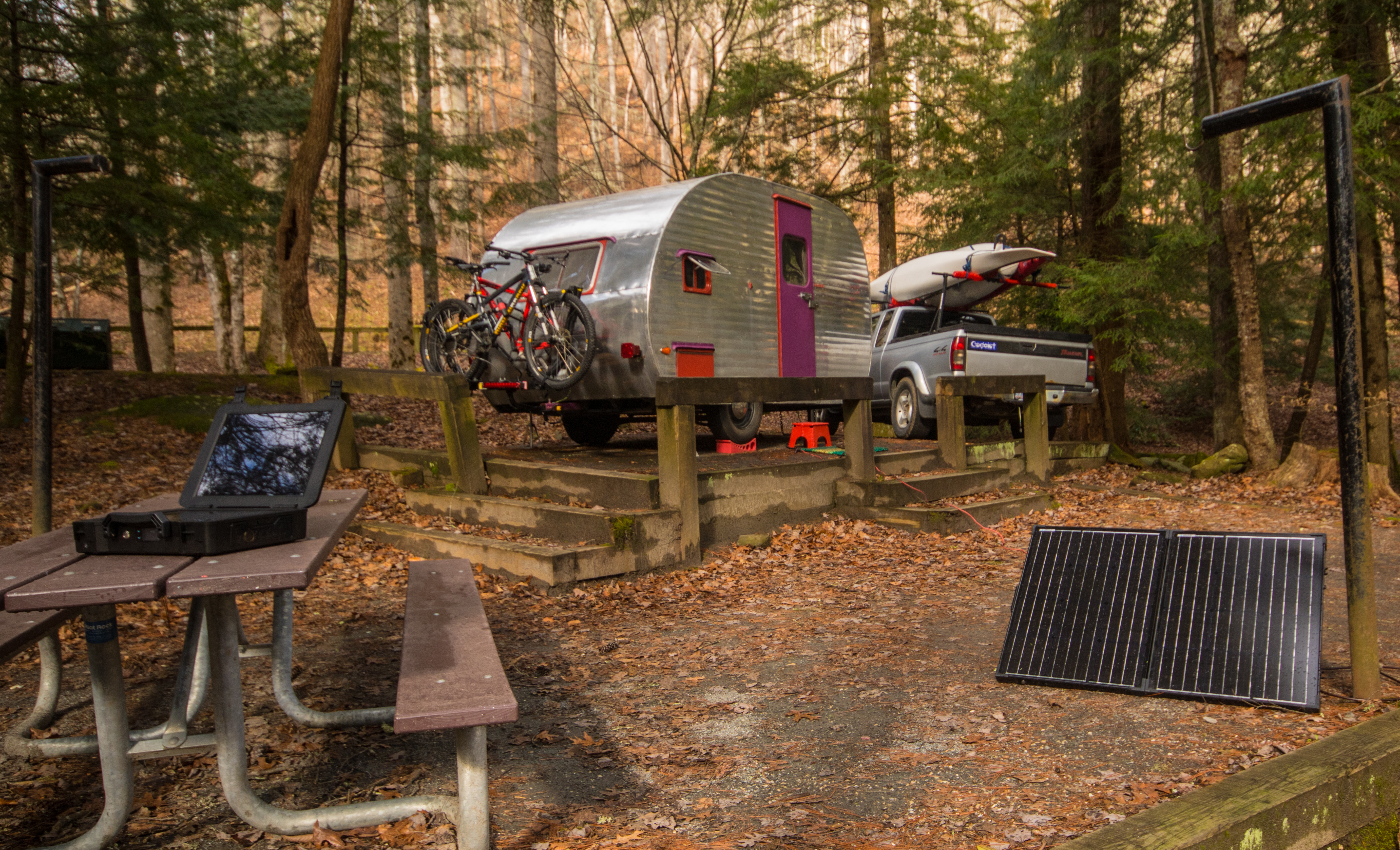 From the very start of our mobile adventure planning back in 2010, we knew we wanted to go solar for our electrical needs. We wanted to live more and work less, and that meant being frugal. We knew that our small investment in solar would pay us back quickly in savings on campsites and allow us to camp in some remarkably beautiful places away from roads and powerlines. A small trailer with small electrical needs meant that we could be comfortable boondocking or camping in non-electric sites, which typically cost less than sites with hook-ups.

The solar decision seemed obvious. Why not combine the mid-twentieth century style of our vintage trailer with state-of-the-art solar technology from this century? While we weren’t the only ones making this leap, for the first few years of our travels it seemed like we were in the minority. We frequently got asked the question, “Hey, is that a solar panel?” by our campground neighbors and folks at gas stations.

Fast forward a few years and the tide has turned, as more and more people power their lives with solar in their residences, off-grid cabins, businesses, boats, and RV’s.During our recent Open House events and seminars

at RV shows, college campuses, and outdoor outfitters, we’ve noticed that the questions we get no longer address the novelty of simply having a solar panel; rather, they focus on what kind, how powerful, and what we can run with our small system. With the cost of solar decreasing and efficiency increasing, it’s no small wonder why. 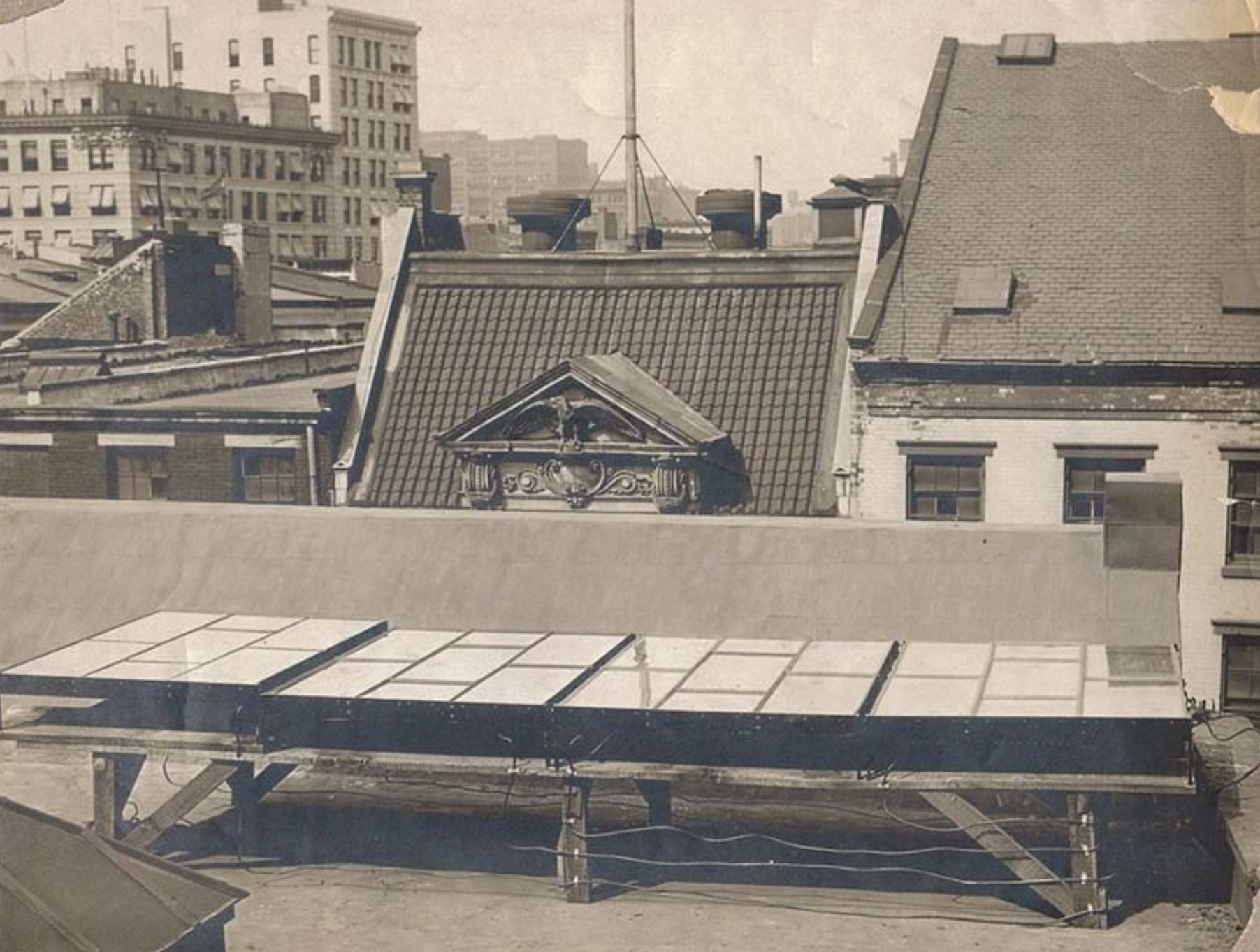 A Brief History of the Solar Panel

Solar power has been around for a very long time, indeed, almost everything we use to power our world can be directly traced back to the sun’s energy. But it may surprise you to learn that the first solar panels (made of selenium wafers) date from the 1880’s, nearly 140 years ago! The earliest iterations only reached an efficiency of around 1%, but formed the groundwork for future innovations. The first modern solar cell, made from silicon, and able to power a modern electrical device was created by Bell Labs in 1954, with an efficiency of 6%.

The cost of these early solar panels was truly beyond the reach of consumers, and solar applications were relegated to NASA satellites and spacecraft. In 1956, just one year before our vintage travel trailer was manufactured, the cost of solar panels was around $300 per watt. Just for sake of a fun comparison, our current 100W system would have a $30,000 price tag – nearly 30 times what we paid for our trailer! Improvements and significant breakthroughs in manufacture and materials in the 1970’s cut the price to $100 per watt. Compare that with a 2019 price of less than $0.50 per watt and it’s no mystery why people have suddenly gotten on board. Indeed, we may have reached a tipping point where it could cost more to rely on our traditional fossil fuel electrical grid infrastructure than diversifying with more green energy sources.

But it hasn’t just been price that’s kept us from making the switch to solar, changing our habits is difficult, breaking away from what’s convenient, or popular, plays a significant role in our society. Until people began to see solar as a reliable, safe, and efficient way to power their lives, sticking with what has always worked remains all too easy. 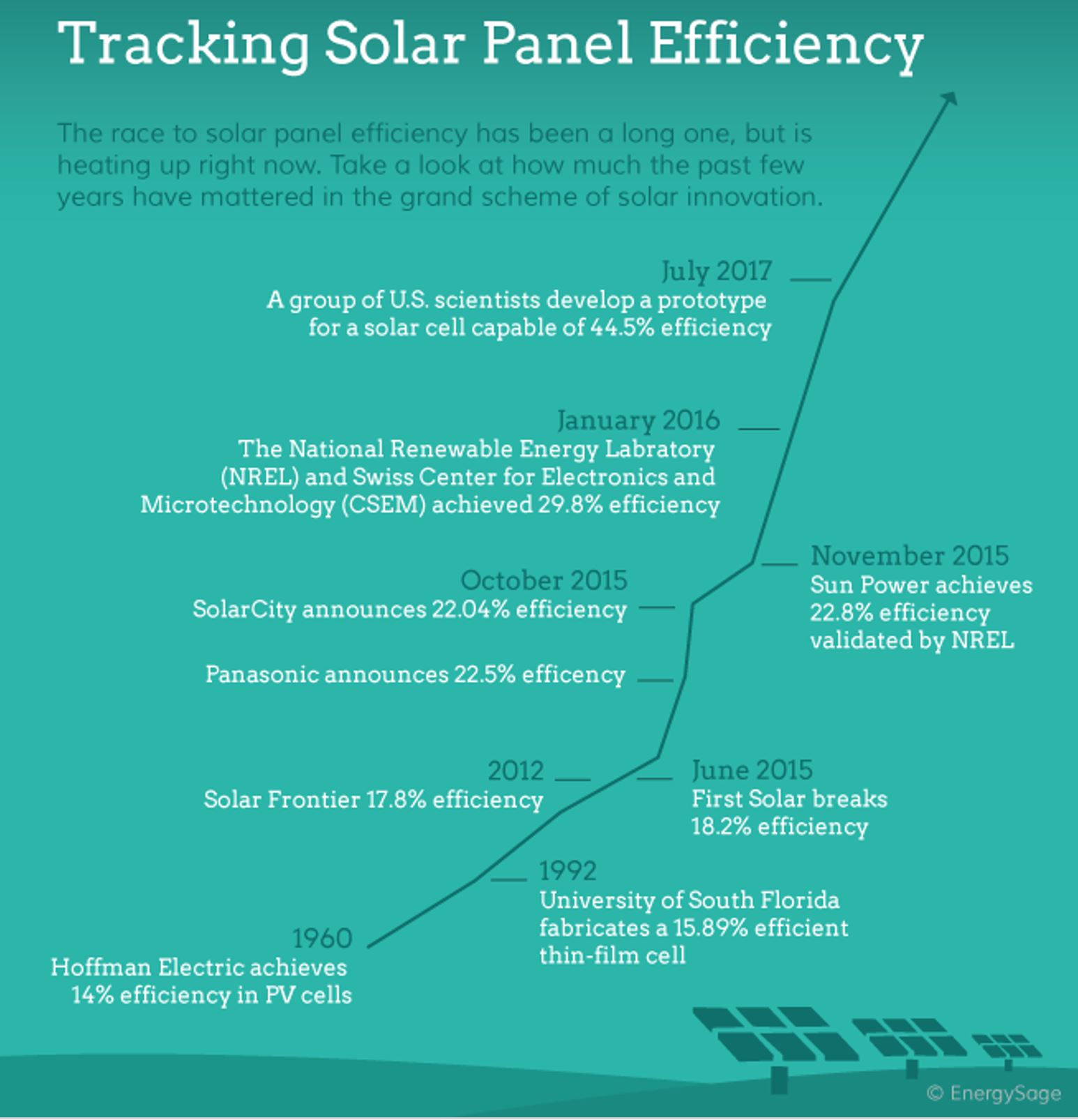 A Tale of Two Presidents

Consider the story of the White House during the Carter and Regan administrations. During his tenure at 1600 Pennsylvania Avenue, President Jimmy Carter had solar-paneled water heaters installed on the roof of the country’s first residence. He commented, “A generation from now, this solar heater can either be a curiosity, a museum piece, an example of a road not taken, or it can be just a small part of one of the greatest and most exciting adventures ever undertaken by the American people.” The late 1970’s saw a difficult period of energy instability in the Middle East (and beyond) which caused a severe oil shortage worldwide and soaring prices at the pumps. Looking for energy options beyond fossil fuels finally had the economic argument to bolster the environmental impact. But even with these contributing factors, change was slow

In a wave of populism, Ronald Regan took over the Oval Office, in January of 1981, and during his tenure had the solar panels removed from the roof, a symbolic gesture dramatized in the 2018 movie, “Vice.” While prices at the gas station gradually stabilized, people inevitably returned to their reliance on big gas-guzzling vehicles and even bigger homes. In 2003, George W. Bush had solar panels installed on the White House grounds, but would not return to the roof until Barak Obama took office in 2009. The panels were installed in 2013.

Throughout the 1980’s and 90’s, solar panels continued to improve in efficiency and many major utility solar installations came online as well as a few novel applications, such as the first solar-powered airplanes, and an annual solar automobile competition titled the “World Solar Challenge.” These examples of what could be done with solar power played a huge role in educating people about the future of energy. By the end of the millennium, buildings such as 4 Times Square in New York City were constructed with integrated solar panel technology to minimize their draw on the grid.

Residential installations received a boost with the US Department of Energy’s “Million Solar Roof” program, and in 2000 a 12 KW system was installed in one family home in Colorado. Additional competitions such as the “Solar Decathlon” with the University finalists highlighted on the National Mall in Washington D.C., brought further awareness of integrated solar technology in the home – and home owners followed suit.

As a response to the economic housing crash in 2006, the idea of very small, off-grid dwellings (of less than 200 sq ft) captured the imagination, or fascination, of the Western world, and “Tiny House” became part of our lexicon. Choosing solar panels for these kind of homes is a natural fit, and just a few panels on the roof can produce all the energy needed.

The tiny house movement jumped to RV’ers, skoolies, and vanlifers in the early 2010’s and people began to outfit their adventure rigs with solar panels so that they can explore wilder areas away from traditional campgrounds with full-hook up utilities.

Efficiency in solar panel technology is currently jumping almost exponentially. In the last 10 years alone, efficiency of experimental panels has nearly doubled, from approximately 20% to 45%. While these prototypes are typically made from more expensive materials, the improvements have trickled down to the consumer level, allowing the average consumer to obtain much higher efficiency panels for a lot less money. 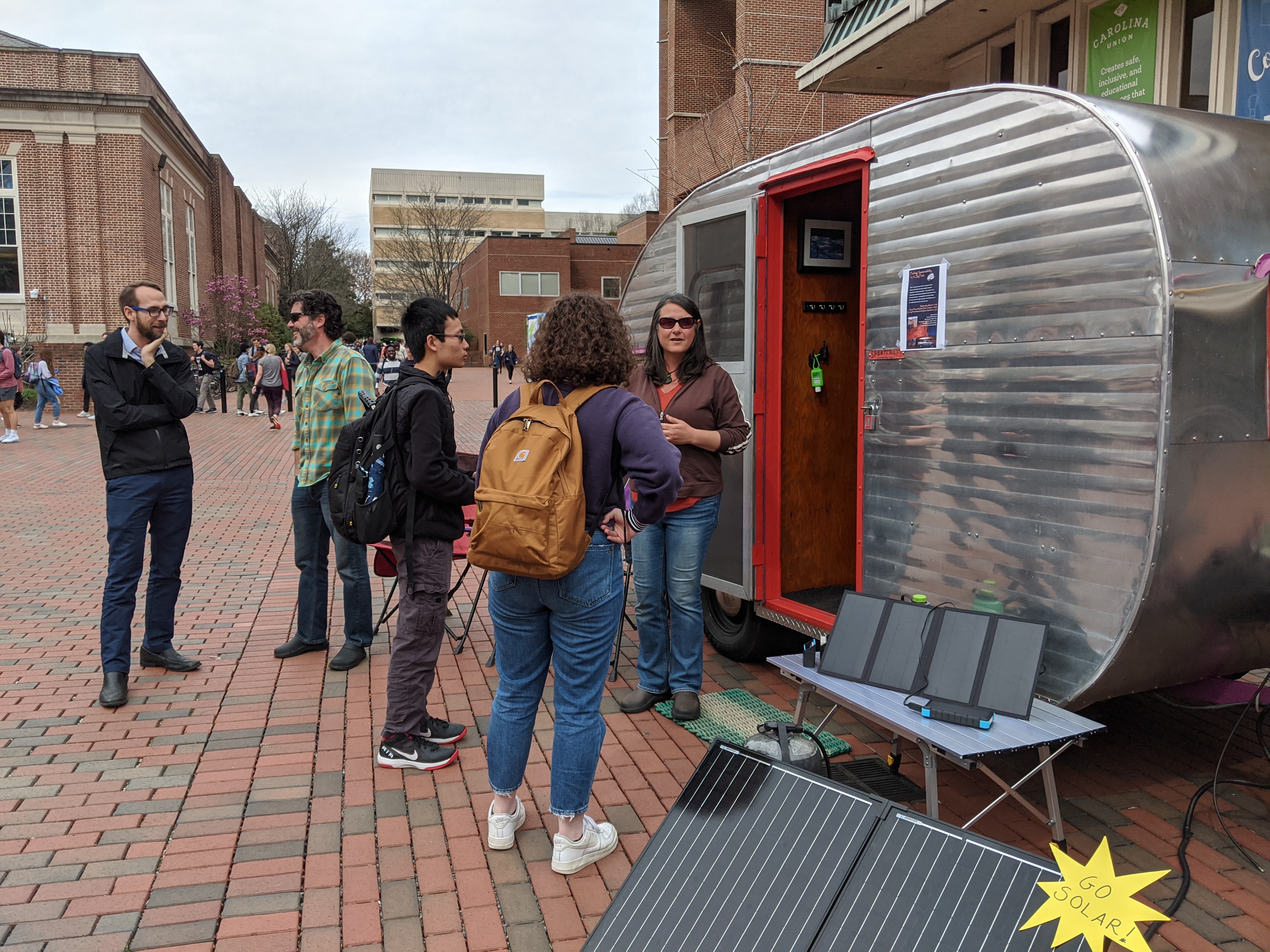 As we’ve traveled the contiguous 48 states, we’ve seen solar installations all across the nation, from large solar farms in the American deserts to neighborhoods full of solar roofs. While it seems obvious that Arizona homes would have solar, the trend seems to have found traction in less likely places. Just a few months ago we visited two sets of friends in Massachusetts, on opposite sides of the state, and found that nearly 1/3 of the roofs in their middle-class neighborhoods were covered with solar panels. With Federal and State Solar Tax incentives creating additional economic drivers for installing solar on residences, businesses, vacation homes, and RV’s, the time has never been better to invest in solar for your own use.

Our small 100W Folding Solar Suitcase has not only powered our mobile life for the past 7.5 years, it has provided us an education in solar. We could read all we wanted about it, but until we actually hooked up a panel to a charge controller and battery, it would just remain an untested concept. Companies like Renogy can be a one-stop-shop for folks wanting to get started, but not sure how to begin. From DIY “starter kits” for off-grid cabins and RV’s to portable solar solutions to charge personal electronics on the go, Renogy has an array of options. Yi Li, Renogy’s CEO, believes that once people see the benefits of solar in action, it’s no small leap to thinking about investing in solar for their traditional homes. And, if we decide to build a tiny home in the future, we would definitely go 100% off-grid solar – we love it that much.

In addition to products like traditional rigid panels,there are some exciting alternatives on the market as well. Flexible panels are super light-weight and can be installed on many non-traditional surfaces; and solar roofing tiles like the Tesla Solar Roof offer the benefit of protecting the home while generating electricity. Even paint-on solar technology has some exciting possibilities for the home of the future. Look for an upcoming article highlighting what is on the horizon for solar technology later this spring!